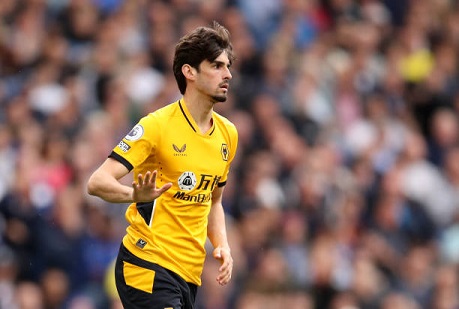 The German Bundesliga dominated much of the headlines for Portuguese Abroad goalscorers this week, with Gonçalo Paciência, André Silva and Tiago Tomás all scoring spectacular goals for their respective clubs on Sunday afternoon.

The other major story was Francisco Trincão’s goal for Wolverhampton Wanderers, who staged a late comeback from two goals down to draw 2-2 at Chelsea having been inspired by the former Braga man. Elsewhere, there were goals for Mathias Lage in Ligue 1 and Josué in the Polish Ekstraklasa, as well as Adrien Silva in the UAE.

Bruno Lage’s Wolves have struggled to find form as the season in England draws to a close, with three straight defeats culminating in the team being booed off as they went down 3-0 at home to Brighton last week. A tough fixture list in the remaining handful of games threatened to create an unpleasant end to the Portuguese boss’ debut season at Molineux.

Saturday’s trip to Chelsea looked set to inflict a fourth consecutive loss when Romelu Lukaku struck twice in the space of a couple of second-half minutes to give Chelsea a 2-0 lead shortly before the hour mark. However, Wolves, who were without their Luso manager Lage due to coronavirus, stunned the European champions with a comeback kicked off by Francisco Trincão.

Wolves’ substitutions had a major impact on the game, with Chiquinho and Trincão both coming on just moments before the latter scored. After receiving a pass from Chiquinho, Trincão drove in off the right flank and when faced with Antonio Rudiger, cut onto his left foot to smash his finish across Edouard Mendy and into the top corner. It was the second league goal of the season for the former Braga man, who has struggled to make the desired impact on his season-long loan from Barcelona.

The best was yet to come for Wolves, who would equalise seven minutes into injury time. Again Chiquinho was the provider, with his cross headed in at the back post by captain Connor Coady right in front of the travelling Wolves fans. As well as the impactful Portuguese substitutes, the visitors also had Jose Sá, João Moutinho, Rúben Neves and Pedro Neto in the line-up.

While much focus inevitably cantered on Trincão after the match, skipper Coady was full of praise for January arrival Chiquinho, particularly for the part played in the late equaliser. The 22-year-old signed for the club in January from Estoril and has so far been integrated slowly with half a dozen substitute appearances.

“I went into the box, hoping Chiquinho would get it,” Coady said. “I thought he was outstanding when he came on. He’s a young lad who’s learning every day and he took the game to Chelsea, he ran at them every single time he got the ball, and he always put a ball inside the box.

“I knew if it came to him that the ball would come in somehow, so it was just about being in the right place at the right time. But the ball was outstanding and all I had to do was put it in the back of the net because he put such a lovely ball in.”

It was a superb Sunday afternoon for Portuguese trio André Silva, Gonçalo Paciência and Tiago Tomás in Germany. All three scored in the Bundesliga, covered in a report here: Portuguese excellence in Germany: Paciência finds form with golaço for Europa finalists Frankfurt; Tiago Tomás stuns Bayern; Silva on-target for Leipzig

Mathias Lage, Josué and Adrien Silva among the goals

Angers secured their safety in Ligue 1 with a resounding 4-1 victory over Bordeaux on Sunday. Former Portugal U21 international forward Mathias Lage rounded off the scoring with his 3rd goal of the season and his second in four matches. Angers are now seven points clear of the relegation play-off with just two matches remaining.

Outgoing Polish champions Legia Warsaw have suffered a disastrous season in the Ekstraklasa, where they sit in 10th place. However, Legia gave their fans something to cheer with a 5-3 win over Gornik Zabre, with former Portugal international Josué getting himself on the scoresheet.

In England, Notts County are sure of a place in the National League playoffs after Ruben Rodrigues scored in a 3-0 win over Altrincham. Already promoted from the Dutch Eerste Divisie as champions, Emmen beat Den Hag 3-0 with Rui Mendes notching his 15th league goal of the season.

Adrien Silva has made habit of scoring goals since his move to the United Arab Emirates. The former Portugal midfielder scored his 3rd goal in 10 matches since joining Al Wahda, but they lost 2-1 at home to Sharjah. Elsewhere in the UAE’s Gulf League, former Porto academy product Tozé struck as Al Nasr won 3-2 against Al Wasl.

🇦🇪 Another goal in back-to-back matches for Adrien Silva in UAE-Pro League.pic.twitter.com/7V5FaPw7aa

Finally, Pedro Eugenio continued his impressive goalscoring form with Astana in Kazakhstan, getting his 6th from 10 games as they won 2-1 at Odabasy; in Turkey, former Tondela defender Tiago Lopes got the winner for Denizlispor against Menemenspor; Asumah Abubakar got the opener for Luzern in a 4-0 win over Servette.

Trincao has looked really good for weeks now, not sure if its too late in the season though.

He seems to excel when the game is more tactical and not so much sprint as fast as you can in one direction. He might benefit from a league change to...

Trincao has looked really good for weeks now, not sure if its too late in the season though.

He seems to excel when the game is more tactical and not so much sprint as fast as you can in one direction. He might benefit from a league change to Italy or Spain where they play with the ball more and its not run and kick.

The price tag vs the payout with Wolves probably isnt there to keep him but who knows...