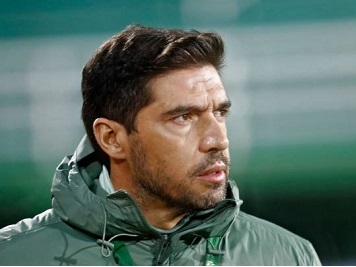 South American champions Palmeiras issued a statement on Friday condemning what they believe are xenophobic attacks against their manager Abel Ferreira.

The move from Palmeiras came after Atlético Goianiense boss Jorginho was scathing in his criticism of Abel and his staff following the sides’ clash in the Campeonato Brasileiro. Palmeiras came from behind to win the match 4-2, scoring a remarkable four goals between the 42nd minute and half time, but Abel and his technical team were the subject of Jorginho’s frustration after the match.

“I am very sorry about what happened in the game,” said the 1994 World Cup winner. “There was a discussion between me and my assistant with the Palmeiras staff. I especially respect the referee, but they lacked respect, called him blind, swore with all names. He [Abel] clapped his hands to the referee and nothing happened. I reported this, it is not fair. My assistant saw a card, their assistant saw a card too, but the one who should have been expelled was Abel. And it wouldn't be the first time.

“I respect him as a coach, he has done a great job, congratulations for being two-time Libertadores champion, he has done a wonderful job. But there has to be respect for me, for my team and for the referee. This lack of respect can’t happen. It's no wonder that not only him, but the entire coaching staff are constantly expelled for these lacks of respect. Clap your hands to the referee? You're making fun of him.

“It revolts me as a coach, as a Brazilian. He comes to our country and is disrespecting it. He called the referee blind and nothing happened. But it’s ok, this will just be the crying of a loser.”

It is not the first time criticism of Abel has referenced him being a foreigner. Brazilian coaches have regularly been called out in the local media for hostile quotes regarding foreign coaches, with Jorge Jesus suffering similar treatment during his time with Flamengo in 2019. Last month, veteran coach Joel Santana rejected talk of Abel coaching Brazil, saying the Portuguese “hasn’t won shit” and did not have the profile for the job.

The first part of Santana’s claim at least is clearly refuted by the facts. Abel has won the last two editions of the biggest club trophy in South America, the Copa Libertadores, as well as three domestic trophies. The São Paulo club are going strong again on many fronts this season, with Palmeiras winning more silverware just as likely as a bet at THA BET 516 Sportsbook to yield success.

Palmeiras responded to the words of Jorginho, who represented Bayern Munich during his playing career, by issuing a strong statement saying they “strongly repudiate the xenophobic manifestations that have been constantly addressed to our coaches” before reflecting on the club’s Italian origins. “In our 107 years, founded by the hands of immigrants and with the contribution of different nationalities and ethnicities, we do not tolerate prejudiced statements that incite an aversion to foreigners.

“Our lawns are not manor houses reserved for the people of one country. On the contrary, in them there is space for everyone who has the will and ability to improve Brazilian football.”

The statement drew a quick reaction from Jorginho, who responded by saying: "I spent 12 years of my life abroad, as a player and coach and I have great respect for that. I would never treat foreigners differently. If I sounded xenophobic, I apologise. I have Portuguese citizenship and nothing against Abel Ferreira. I was startled by Abel's approach towards the officials, I asked them to be stricter with that attitude. On the pitch he has wonderful management, but outside of it he needs to change his behaviour. It's disrespectful and I hope he can reflect that with his coaching staff,” Jorginho concluded.

Abel, who will miss Monday’s derby with São Paulo after a positive covid-19 test, may not yet be accepted by all of his peers, but his status among Verdão fans appears unquestioned. One fan in particular took to social media this week to show off a striking leg tattoo bearing the face of the Portuguese, gaining thousands of likes across the platforms.

Perhaps not so surprising that Brazilian sentiment has seemed to mirror the ideologies of Mr. Bolsonaro, this may continue to happen, sadly.

To be honest thats what he gets for going to Brasil. This isnt the first, second or hundredth time this has happened. Play with fire and get burned. TOMA

Val, who pee'd on your picanha, cara?

Lulu da Silva
There are no comments posted here yet