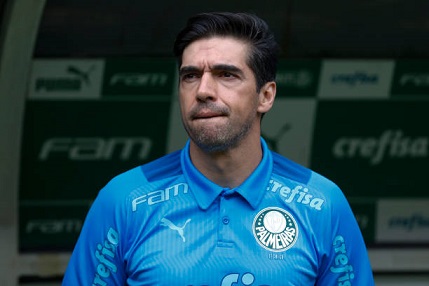 Abel Ferreira has added to his glittering medal collection in South America by guiding Palmeiras to the 2022 Campeonato Brasileiro title.

Palmeiras clinched the championship on Wednesday night by opening up a 13-point lead over Internacional and celebrating the occasion in style with a 4-0 home victory over Fortaleza.

Fittingly, Abel was crowned Brazilian champion on the day he marked two years in charge of Verdão. Since arriving at Palmeiras, the Portuguese boss has won two Copa Libertadores titles, one Recopa Sudamericana, one Copa do Brasil and the Campeonato Paulista before finally adding the domestic league title.

“It’s a year to remember,” Abel said amid the celebrations. “The feeling is of great gratitude and pride for everything these players have done. Our self-esteem is so great that we have space for those who like us and for those who don’t like us.

“But those who don’t like it will have to swallow us anyway, because the numbers are there. It’s undeniable what this team does. And against the facts, there are no opinions that hurt us, because in our hearts everyone fits: those who like and those who don’t.

“It’s a team that when it doesn’t play well, it still plays well. It’s different. A team that knows when to attack and defend, to play in a balanced way. Regardless of where it is and whoever it is, the same mentality and way of playing. That’s the result of a lot of work. The players taught me the way to be champion and all together we achieved this feat with clear merit. Only those who are in bad faith do not recognise the quality and ability of the squad.

“Congratulations to Internacional, who had an extraordinary campaign. But, as Internacional’s coach [Mano Menezes] said, there was a problem here called Palmeiras. Palmeiras’ consistency. This is the result of the merit of my players, who are to be congratulated.

“The hardest thing is not to win, but to win consistently. Quite honestly, I don’t know if it’s just here in Brazil, but it’s very difficult to see a team win consecutively three seasons in a row like Palmeiras won. That’s what we feed on, victories.”

Abel becomes the second Portuguese to win the Brazilian title in recent years, following Jorge Jesus’ scintillating Flamengo side of 2019. Elsewhere in Brasileirão, Vítor Pereira’s Corinthians are in the thick of the battle for a top four place, while Luis Castro and Botafogo are mid-table upon their return to the top-flight and Cuiaba are well positioned for survival under António Oliveira following back-to-back wins.

YOU MAKE US PROUD