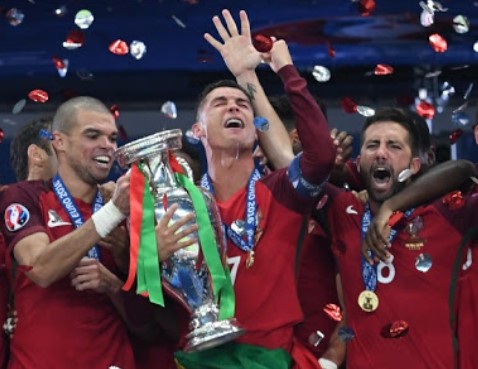 Making it to one hundred appearances for your national football team is no mean feat and one that truly deserves to be recognised. Our beloved Portuguese team have only bestowed this honour on six incredible players: Cristiano Ronaldo, Luís Figo, Fernando Couto, Nani, João Moutinho and Pepe.

While the footballing talent of these players is widely appreciated, sometimes it’s easy to forget they have a life outside the beautiful game. Here’s a little background and some fun facts on each of Portugal’s six centurion capped players.

Did the Magnificent Six ever play together?

While there were plenty of overlaps between all six players, never did they all come together in one match. It would be hard to imagine any team being able to beat this heroic sextet.

Often, two of the six would play on the same team, and this was always reflected in the prices offered by bookmakers. As there’ll be no action on the pitches this summer, you’d have to imagine the odds on offer would be short anyway. During periods of inaction like this, it’s good to have a distraction, so the current betway offers on eSports betting provide a bit of light relief from the lack of football.

It only makes sense to start with the most capped player in Portuguese history, Cristiano Ronaldo. He was born in São Pedro, Funchal, on the island of Madeira and grew up in the nearby parish of Santo António with his three older siblings. His upbringing was not a wealthy one, as his mother was a cook and his father a gardener. While his parents provided for their children as best they could, the four children all shared the same room, and luxuries were scarce.

Nonetheless, Cristiano Ronaldo’s undeniable talent for football was encouraged by both parents. His father helped out at local club Andorinha as the kitman, and he took his son there to join when he was just a child. Ronaldo’s natural flair for the game quickly saw the budding footballer go from strength to strength and he was soon getting noticed. At the age of only 12, he and his parents agreed he could follow his dream of becoming a professional footballer, and he moved alone to the capital of mainland Portugal, Lisbon, signing for Sporting Clube de Portugal.

After going on to become one of the greatest footballers of all time, and having been ranked as the world’s highest-paid athlete by Forbes, and one the most followed users on Instagram, it is all a far cry from his impoverished early years. You could say that early encouragement from his parents paid off!

Born in Almada, the city on the other side of the River Tejo to Lisbon, Luís Figo enjoyed a glittering career winning multiple collective trophies at Sporting, Barcelona, Real Madrid and Inter Milan and being crowned FIFA World Player of the year in 2001. But Figo has also pursued several high-profile avenues in a busy schedule since hanging up his boots.

Alongside the former Portugal youth team manager who first selected Figo, Carlos Queiroz, he dallied in the world of A1 Grand Prix motor racing. He also owns an exclusive bar in the Algarve and he is the founder of Network90, a private networking organisation for all sectors of the Professional Football Industry. He has also done extensive charitable work, most notably in the fight against the spread of tuberculosis.

In 2015, Figo set up a campaign to succeed Sepp Blatter as the FIFA president. He later dropped out of the race, but Luís Figo is a name we are likely to see involved in important positions in the game going forward.

Uncompromising centre-back Fernando Couto has a brilliant history with the national football team in his long and successful career. Born in 1969, he quickly rose to professional level, originally making a name for himself at FC Porto. He went on to play for top clubs in Spain and Italy, amassing 110 caps for the Portuguese national team. His career spanned 21 years, during which he had many great successes, including three UEFA trophies and partaking in the 2002 World Cup.

Couto’s career is remarkable for its longevity. In 2008 he was still turning out regularly in Italy’s top flight for Parma, eventually retiring at 39 years of age. He then moved into the administrative side of the game, becoming a director at Portuguese club Braga.

Born in 1986, Nani did not have a smooth ride to the top. He is of Cape Verdean descent, and when he was still a toddler, his father left to visit Cape Verde and never came back. Shortly afterwards, his mother left also. Abandoned by his parents, he was raised by his Aunt Antonia. He has nine older siblings from his mother’s side and five from his father’s side. One of his sisters gave him the nickname of Nani, that stuck with him.

Being the youngest of the family, his elder siblings looked out for him and encouraged him to take part in their games. His older brother taught him to play football, and around the age of 14, he realised Nani had uncommon skills. He took him to Real Massamá, where the club helped to get him on track and it was not long afterwards that Nani signed for Sporting CP, hoping to follow in the footsteps of his idol Luís Figo. Little did he know that years later, despite his career highs and lows, he would equally become a Portugal great.

For João Moutinho, the rise to the top was almost predictable. Born to a sports-loving mother and a father who was himself a footballer, it was clear that João Moutinho had at least an interest in sports ahead of him. He has four siblings and two of whom are also professional footballers. He began his football career at just ten years old at his home-town club in the Algarve, Portimonense, where he displayed much of the style of play that he remains famous for today.

Moutinho is known for his simple, neat and incredibly effective style of play, no matter how chaotic or hectic the situation. And it was precisely those qualities on show as he and his wife came up with a genial idea for making impromptu face masks during the Coronavirus outbreak.

Born in 1983 in Brazil, Pepe’s father encouraged him to work on his game from a young age, especially his physical prowess by throwing a football to him on the beach while Pepe was in the sea to practise his jumpring and heading.

That said, his parents named him after the scientists Johannes Kepler and Charles Louis Alphonse Laveran. Perhaps if he had gone on to become the highly regarded scientist that his parents had hope for, he would be known by his full name of Kepler Laveran de Lima Ferreira, but thanks to his football prowess, he only needs one name - Pepe.

Throughout his career, he’s been known for his physical strength (that sea training obviously bore fruits!) and aggressive defending, as well as an edge and tenacity that has seen his career reaching dizzying heights, winning everything there was to win a club level at Real Madrid and playing an enormous role in Portugal being crowned European Champions in 2016.

This was probably Pepe's last tournament. Damn. Ronaldo next year and maybe maybe the WC. Moutinho can go for a while, big engine, small car. It was a shame the way Nani went out, absolute magic during his early Man U days.

I think that currently this is the strongest squad Portugal has ever had in terms of a complete team.

Just curious what everyone thinks is our weakest link (position) right now. I’m going to say right back isn’t it.

We're old and inexperienced at CB. Pepe's out. I don't see anyone replacing his contribution. At some point, Ronaldo will drop. It's just biology. Unless, he knows something we don't know. This was the year. This was supposed to be our year....

We're old and inexperienced at CB. Pepe's out. I don't see anyone replacing his contribution. At some point, Ronaldo will drop. It's just biology. Unless, he knows something we don't know. This was the year. This was supposed to be our year. We're not winning it next year. We'll go out like we did at the Confederations Cup. FUCK!! This really sucks. In other news, Coentrao retired, a case of wasted potential.

I don't get why they can't just play the Euro in August. It's bs. Yet the leagues are going to finish up. Honestly, I only value the domestic leagues as a way to prep for the international tournaments, and I'd bet the shirt of my back that most...

I don't get why they can't just play the Euro in August. It's bs. Yet the leagues are going to finish up. Honestly, I only value the domestic leagues as a way to prep for the international tournaments, and I'd bet the shirt of my back that most soccer/futbol/whatever fans feel exactly the same way. We're all super nationalistic. You talk to a Croatian; it's all about Croatia. You talk to a Colombian or Brazilian; it's all about Colombia or Brazil. Even your "we're above it" citizens are all about where they're from and the connection that they feel with their country's homegrown talent.