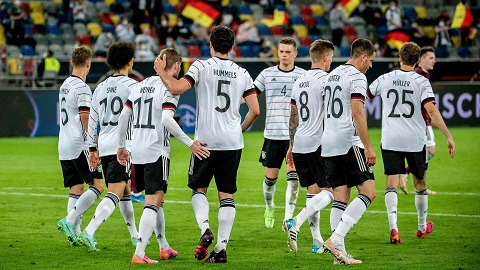 As well as being PortuGOAL’s correspondent for the Seleção at the various youth levels, Matthew Marshall resides in Germany and has long reported on Bundesliga football.

No better person, therefore, to give us an assessment of what awaits Portugal in their second Euro 2020 Group F match when they take on Die Mannschaft in Munich on Saturday 19 June.

Ones to watch - Who are Germany’s star players?

Joshua Kimmich is an exceptional talent who is adept at playing in central midfield or at right-back. His vision and passing accuracy allow him to create an abundance of chances for his teammates.

Kai Havertz took a while to get going at Chelsea, but his talent is unquestionable, and he is still only 21-years-old. The attacker is very versatile, and his movement produces plenty of problems for opposition defenders.

Thomas Müller spent 18 months away from Die Mannschaft but has been brought back into the squad by Joachim Löw. He scored 11 goals and registered 18 assists in the Bundesliga this season. The self-described “space interpreter” is another player who is hard to contain.

Portugal have to be wary of the German attack which has plenty of speed and unpredictability in the positions they occupy. They can’t rest for 90 minutes because Germany’s bench will contain a number of players that can come on and trouble a tiring defence.

Germany are poor in transition and defensively susceptible. They have kept three clean sheets in their last 14 matches which includes a 6-0 defeat against Spain in the UEFA Nations League.

Germany’s central defenders can be targeted in 1 on 1 situations. Depending on who starts, there could be plenty of individual matchups that Portugal can exploit.

Formation and playing style - what system do Germany usually play? Would you describe them generically as an attacking or a defensive team?

Joachim Löw has alternated between a back four and a back three. He has selected a back three for both of their recent friendlies which is likely to be replicated at Euro 2020.

Löw has so much versatility with his attack that he can play one or two strikers.

Germany are an attacking team which leaves them vulnerable at the back as we saw at the 2018 World Cup.

Mood in the camp - do you think Germany come into the Portugal match in a confident frame of mind?

I think the 6-0 thrashing at the hands of Spain in November will have dented Germany’s confidence. They have played against weak opposition in the five matches since.

Having said that, they will relish the fact that many people are writing them off as title contenders.

Joachim Löw dropped Mats Hummels and Thomas Müller in November 2018, citing a need to rejuvenate the squad. The real reason was that those two players have a significant influence in the dressing room, and they were critical of the coach during and after the disastrous World Cup campaign.

If Germany cop a hiding against France in their opening match, an implosion could be on the cards which will play into Portugal’s hands.

What was the reaction in the German media to the Euro 2020 draw?

The German media and public know it’s a tough group, but with four of the six third placed nations advancing to the Round of 16, there is plenty of optimism of reaching the knockout stage.

They know the squad contains an incredible amount of talent.

The main concerns are not the opposition, they are Joachim Löw. The German manager was a disaster at the 2018 World Cup, he didn't resign and the only reason he wasn't sacked was the incompetence of the people above him at the DFB.

Löw's side have failed to beat a top-quality opponent since crashing out of the group stage in Russia, unless you count a last minute 3-2 win against Netherlands in a European Championship qualifier in March 2019.

What will the result of Germany-Portugal be?

A lot depends on their opening matches, but if Portugal are brave they can definitely hurt Germany’s suspect defence.

They have a great chance to avenge the disastrous 4-0 defeat in their opening match at the 2014 World Cup. Pepe will also have a point to prove after Thomas Müller baited him into getting sent off in the first half in Brazil.

I am hopeful Portugal can win to gain confidence before taking on France in the final group game.

Germany are a side that Portugal match up pretty well against tactically. If Santos gets his tactics right and we manage to put some incisive counter attacks together, we could potentially score 2 or 3 goals against that defense.

Germany are a side that Portugal match up pretty well against tactically. If Santos gets his tactics right and we manage to put some incisive counter attacks together, we could potentially score 2 or 3 goals against that defense.

That being said, the game is going to be played in Munich so they do have that going for them.

I don't expect a thrashing due to Santos' tactics, but I do think this is the best chance we've had in a very long time to get a result against the Germans.

We never play well against Germany under any circumstances during the past 20 years. Our last win was in 2000. They always play Portugal tough. I hope Pepe keeps his cool. I would be happy with a tie with Germany especially if we beat...

We never play well against Germany under any circumstances during the past 20 years. Our last win was in 2000. They always play Portugal tough. I hope Pepe keeps his cool. I would be happy with a tie with Germany especially if we beat Hungary. We have to beat Hungary first. Cannot go into Germany with a lost. Forca Portugal.

Hareesh,Kerala/India
This comment was minimized by the moderator on the site

When playing against Portugal Germany takes it all simple.That mentality they gained over years is their biggest advantage.Their legs will have no weights of preassure and their game will be free flowing.Even if Portugal scores one or two goals...

When playing against Portugal Germany takes it all simple.That mentality they gained over years is their biggest advantage.Their legs will have no weights of preassure and their game will be free flowing.Even if Portugal scores one or two goals in the first half that shouldn't be a problem for them.But if Portugal restricts them from scoring in the first half I think the game will change.I don't mean parking the bus but Portugal should be very careful in the first half.Portugal should control them in the midfield and make it easy for defenders.With all respect to Germany I think Portugal will win 2-0

Philipp
This comment was minimized by the moderator on the site

This article is quite poor and contains too much opinion and overinterpretation (why Hummels and Müller were dropped or why Löw was not fired).