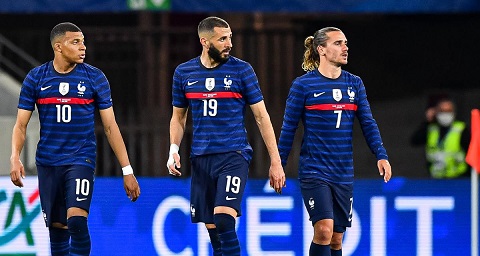 In the third of our series looking at Portugal’s Group F opponents at Euro 2020, we call on the expertise of French football writer Jeremy Smith.

Jeremy breaks down the vital information surrounding France, none other than the current World Champions and many people’s favourites to lift the European Championship crown in one month from now.

Ones to watch - Who are France’s star players?

Hard to cut that answer down as there are so many in the squad. For me, the player who really makes the team tick is Antoine Griezmann, who I maintain is actually under-appreciated. The understanding and complimentarity of Paul Pogba and Ngolo Kante is crucial to the balance of the team. And of course the return of Karim Benzema is the intriguing story as he is such a superstar of world club football. But I guess the real star man is potentially Kylian Mbappe, who has had his best season goalswise and is ready to place himself as the successor of Messi and Cristiano. He just needs to keep things simple and resist the temptation to be too selfish.

Weak points – well, see above – no defenders mentioned. Lloris and the back four have all had their patchy periods of form since the World Cup and even in comfortable warm-up wins vs Wales and Bulgaria had a couple of shaky moments. At their best they are all excellent but they need to be on their game and keep their concentration if France are to go all the way.

Formation and playing style – what system do France usually play? Would you describe them generically as an attacking or a defensive team?

France under Deschamps have a reputation as a defensive side, which I personally think is harsh. Just because they’ve been good defensively, as in the last World Cup, it doesn’t mean they are defensive. They also scored 11 goals in the knock-out stage in Russia! I think Deschamps has simply been pragmatic and played to the team’s strengths – be mean at the back and ruthless on the break. Yes there is lots of offensive talent available, but you can only play a certain number at once, you have to have balance in the team – and no national team, save maybe Brazil in 1970 and Spain in 2008, has won a major tournament playing champagne football.

As to formation, Deschamps began Euro 2016 and World Cup 2018 in a 4-3-3 but ditched both to play two up front, mainly playing in the last couple of years in a lopsided 4-2-3-1 with Mbappe pushing forward on the right and Matuidi/Rabiot sitting deep on the left. But Benzema’s return has led to a 4-4-2 in a diamond, with Mbappe and Benzama ahead of Griezmann but all three allowed some freedom of movement. Possibly the big question is whether Kante plays at the base of the diamond with Rabiot on the left, or whether Tolisso will play the sentinel to allow Kante more freedom.

Mood in the camp – do you think France come into the Portugal match in a confident frame of mind?

Yes I do. Although the performances haven’t always been great the last couple of years, France have generally found a way to win and seem to have a good number of players in good form. As reigning world champions they should feel confident. The concern of course is of becoming over-confident – it wouldn’t be the first time (see 2002 above). But I think Deschamps and the leaders in the team will hopefully keep everyone’s feet on the ground.

What was the reaction in the French media to the Euro 2020 draw?

Could have been better! No one wants to be in the group of death, and there have of course been some epic matches between France and both Germany and Portugal in the recent and distant past. There was some chat about revenge missions but I think that that is just media games. The teams have changed, nothing will change the results of the Euro semi win over Germany and final defeat to Portugal, for example, and this is a whole new tournament and challenge. And Hungary should not be forgotten about, despite their injury blows. My concern for France is that they are often slow starters so a first match against Germany in Germany really scares me.

What will the result of France-Portugal be?

Let’s hope that both teams are already qualified and so it doesn’t matter anyway! France should be able to beat any other team. But Portugal have got so many matchwinners that if France are at all off their game or lose concentration, Portugal can punish them. I really hope that France don’t go into the match needing a win, as I worry about Portugal picking them off on the break. Let’s go for a convenient draw that suits both teams...

Our thanks to Jeremy. To keep track of all things French football be sure you follow him on Twitter @jeremysmith98.