Portugal qualify for the U17 European Championship in Israel 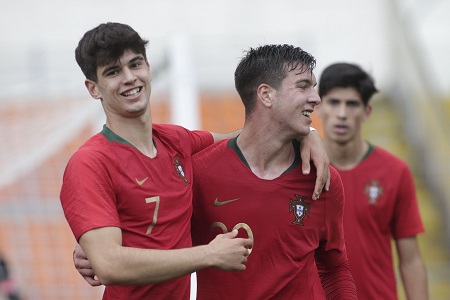 Portugal won all three games in the elite round to qualify for the 2022 UEFA European U17 Championship in Israel.

José Lima’s side beat Republic of Ireland 4-1 before leaving it late to secure a 2-1 victory against Bulgaria. The Equipa das Quinas fell behind in the 2nd minute against Finland before turning on the style to secure an emphatic a 9-1 victory.

The tournament is being hosted in Israel, beginning on 15 May with the final to be played on 1 June. The draw will be held on 6 April.

João Veloso unleashed an unstoppable shot into the top corner to give Portugal the lead in the 18th minute. The Benfica midfielder went close in the 32nd minute before José Lima’s side extended their lead on the stroke of half time.

Ireland got back into the game in the 72nd minute when Portugal failed to clear and Mark O'Mahony took advantage. The visitors went close to equalising but couldn’t find the net and paid the price in added time.

João Gonçalves beat his man and delivered a cross that Rodrigo Ribeiro volleyed into the net. There was time for one more goal, Ivan Lima making no mistake from close range after Gustavo Varelas’ shot was saved.

It couldn’t have started any worse as Bulgaria took the lead with their first attack in the 2nd minute. Roberto Iliev Raychev released Trung Thanh Nguyen Do, his cross finding Borislav Marinov who converted from close range.

Portugal had their work cut out to break down a Bulgarian side that hadn’t conceded in four qualifiers. 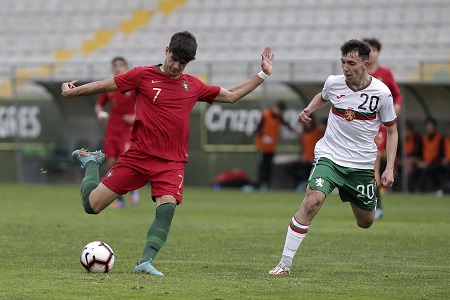 Portugal’s persistence paid off and they equalized in the 29th minute. João Conceicão’s cross was punched away by Bozhev, the ball landing perfectly for Ussumane Djalo who made no mistake.

Lima went close less than a minute later, his shot kicked away by Bozhev as Portugal turned the screw and prevented Bulgaria from getting out of their own half. Rodrigo Ribeiro hit the post just before the break after some great work from Lima.

Portugal continued to dominate in the second half, José Rodrigues heading Lima’s cross over the bar before Djalo and Rodrigues saw their shots saved.

Gustavo Varela replaced Rodrigo Ribeiro in the 84th minute and would score the decisive goal two minutes later. Djalo’s low drive was saved, but only as far as the PAOK U19 striker who reacted first and finished from close range.

Portugal’s habit of conceding in the 2nd minute continued in Viseu. It was a well worked free kick, Juho Talvitie unleashing a powerful swerving shot that Diogo Fernandes couldn’t keep it out of the net.

It didn’t take long for José Lima’s side to get on top and they equalized in the 13th minute. João Gonçalves’ through ball found Afonso Moreira, he cut inside and squeezed the ball under Kalle Kuisma.

Gonçalves put Portugal into the lead two minutes later, picking up the ball on the edge of the box and finding the top corner with a classy finish. The chances kept coming with the lead extended on the stroke of half time, Moreira’s cross picking out José Rodrigues who headed into the net.

Finland’s fortunes changed dramatically in the 60th minute. Ivan Lima was hauled down by central defender and captain Uusitalo Eero, he was sent off and a penalty was awarded with José Rodrigues converting into the bottom corner.

José Lima made a triple substitution with Ussumane Djaló, Afonso Moreira and Ivan Lima making way for João Veloso, Rodrigo Ribeiro and Tiago Andrade. A minute later it was 5-1. Tiago Andrade beat his man, drove to the byline and found José Rodrigues who secured his hat-trick from close range.

The chances kept coming as Finland completely fell apart in the final 15 minutes.

Rodrigo Ribeiro took centre stage and scored the next three goals. He was set up by José Rodrigues for the first, did it all himself for the second and finished a fast break to complete his hat-trick.

Portugal have plenty of firepower

Portugal failed to keep a clean sheet in the elite round, but plenty of players produced positive performances.

Midfielders João Veloso and João Gonçalves unleashed unstoppable strikes and José Rodrigues netted four goals to add to his two strikes in the qualifying round.

The wingers were devastating throughout, Ivan Lima and Rodrigo Ribeiro constantly harassing opposition defences with Afonso Moreira impressive against Finland.

All of the players I picked out to watch after the qualifying round scored against Finland and should remain prominent in Israel. João Veloso put his name into the hat after two strong performances and Rodrigo Ribeiro’s 15-minute hat-trick made it four goals in the elite round.