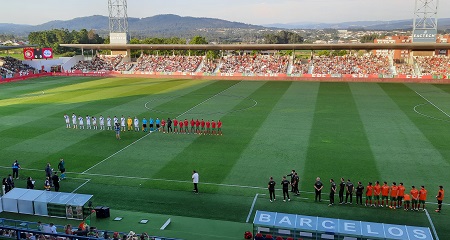 Portugal ended their European U21 Championship qualifying campaign with a 2-1 win against Greece.

The Equipa das Quinas end the campaign top of Group 4 with nine wins and a draw, 41 goals scored and three conceded.

Greece started the match with intent, earning two corners and creating the first opportunity in the 10th minute. Marios Vichos released Giannis-Fivos Botos who had Samuel Soares to beat, but he shot closer to the corner flag than the goal with Tiago Djaló closing in.

Portugal struggled to create opportunities and had to wait until the 30th minute for their first chance. Paulo Bernardo’s cross was met by Gonçalo Ramos, his looping header saved by Christos Talichmanidis.

Nuno Tavares was looking dangerous down the left wing, teasing crosses into the box with Fábio Silva heading high and seeing another effort deflected over the bar.

Rui Jorge's half time talk worked a treat with Portugal strarting the second half on fire.

João Mário had already gone close with a cross into the box, and it was second time lucky in the 48th minute, his delivery met by Paulo Bernardo who timed his run to perfection and headed home.

Samuel Soares was tested in the 55th minute when he tipped Lefteris Lyratzis’ shot wide. The visitors couldn’t maintain the pressure however, and were 2-0 down a minute later.

Fábio Silva  was the provider on this occasion, taking a touch in the 18-yard box before drilling a low cross towards goal where Gonçalo Ramos converted from close range.

João Mário hit the bar with a wayward cross in the 76th minute before Nuno Tavares fired a fierce shot that narrowly missed the top corner.

Jorge made his final substitution in the 81st minute with Rodrigo Conceição replacing João Mário.

Too little too late

Greece manager Georgios Simos had to go for broke and made a last ditched attempt to bridge the gap in the 85th minute, Georgios Koutsias, Fotis Kitsos and Michalis Kosidis replacing Georgios Kanellopoulos, Vasilios Zagaritis and Efthymios Christopoulos

Koutsias pulled a goal back in added time, but it was too little too late for the Greeks who missed out on the play-off position, overtaken by Iceland who beat Cyprus 5-0 in Reykjavik.

Rui Jorge showed Greece and the 11523 spectators in Barcelos the respect they deserved, selecting a full strength side with Vasco Sousa replacing the injured Fábio Vieira in the playmaking role.

Greece required a draw to reach the play-offs, setting up with three central defenders and little space between the lines. That suffocated Sousa and forced Portugal to launch balls into the box from deep or out wide.

Rui Jorge's tactics were almost identical to what we saw against Liechtenstein, the big difference being that Greece are a far superior opponent that possess a much taller and better organised defence.

Regardless, Portugal eventually broke them down and were deserved winners.

Jorge celebrated 100 games in charge of the U21 side with another victory, making it 73 wins, 15 draws and 12 defeats, Equipa das Quinas scoring 257 goals with 80 conceded.

In charge for more than a decade, he reflected on his achievement before kick off. "It is a sign of continuity and longevity. It gives me and my technical team great pleasure to deal with these groups in these 12 years.

The players who have passed through have left a legacy of quality of play and behavior, and I feel satisfied to lead this group and being able to see great players with enormous talent up close, who today are the pinnacle of football worldwide."

Jorge has used 35 players in 10 qualifying matches, a campaign that started in September 2021 with a 1-0 win against Belarus in Amadora.

Since then they have racked up the frequent flyer points, travelling to Iceland, Cyprus, Greece, Armenia and Liechtenstein. They have regularly thrilled supporters in the motherland, banging in goals in Vizela, Faro, Portimão and Barcelos.

This is a squad that is superior to the one that lost 1-0 against Germany in the 2021 European U21 Championship final. They will be one of the favourites to go all the way in Romania and Georgia, the tournament taking place from 9 June to 2 July, 2023.

manny
This comment was minimized by the moderator on the site

Anyone know why fabio carvalho did not play?
He needs to be offered a chance to play for the senior side.during the next set of friendlies.. So as not to lose him to england

I would say he wasn't 100% fit and/or had a minor injury and was sent for an early holiday.

He will be a key part of Portugal's U21 squad in the European Championship next year. I don't think there is any chance he will switch his allegiance to...

I would say he wasn't 100% fit and/or had a minor injury and was sent for an early holiday.

He will be a key part of Portugal's U21 squad in the European Championship next year. I don't think there is any chance he will switch his allegiance to England.

I hope not but if he proves himself at Liverpool early on in the season we need to be aware that England will not hesitate if they have a chance to bring him on board. Southgate has even mentioned him in a press conference and said he was sad to...

I hope not but if he proves himself at Liverpool early on in the season we need to be aware that England will not hesitate if they have a chance to bring him on board. Southgate has even mentioned him in a press conference and said he was sad to lose him but as things stand he can switch back if he sorts a UK passport out.

I think he did not play the Greece game due to qualification already being wrapped up.

Read More
Christopher Santos
There are no comments posted here yet