Can Portugal Women spring a surprise in Euro 2022? 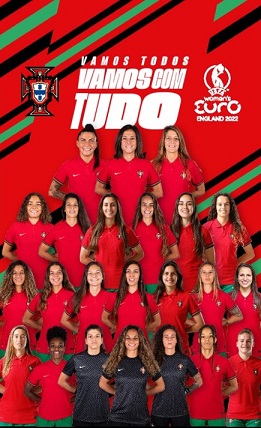 The domestic season drawing to a close has not relegated football from the top of the sports headlines. There’s plenty of international action forthcoming, and we don’t just mean Portugal’s preparations after their perilous progress to the final stages of Qatar 2022.

Before we focus on the Middle Eastern adventure, the women’s game will take centre stage. Euro 2022 gets underway in the UK at the beginning of July, with 16 teams fighting it out. Portugal’s women qualified by default after the Russian team was excluded, and therefore have nothing to lose and everything to prove.

The teams have been split into four groups of four. Each will play three group matches against the other teams in the group, with the top two from each advancing to the quarter-finals. Portugal finds itself in Group D, alongside defending champions Netherlands plus Switzerland and Sweden. It’s fair to say that Netherlands and Sweden are favourites to make it through to the quarters, while the soccer odds speak volumes for Portugal’s outsider status.

Everyone loves an underdog

Spain, England, France and the defending champions are all among the favourites and are expected to make it to at least the semi-finals. At the same time, it would be madness to rule out Germany. While the team has, like the men’s, underperformed in recent tournaments, this is nevertheless the team that has won eight out of the last 10 European titles.

All this combines to mean Portugal’s progress in the group stages is unlikely to provoke significant media attention. The opening encounter against Switzerland will be vital, however. Win it and it will be the ideal foundation for pulling a surprise.

It’s also worth remembering that regardless of the sex of the players, European Championships have a habit of spitting out some unexpected results from time to time. Portugal were, of course, on the receiving end when Greece blew them aside in the 2004 final, before reversing the role with victory at Euro 2016 against hot favourites France in the Paris final. And who can forget Denmark’s 1992 victory? That was all the more pertinent as Denmark’s men qualified for Euro 92 under similar circumstances to those of Portugal’s women this year.

Past performances and winners

So it is that we will take a look at what has happened in previous tournaments, with the caveat that past results are no guaranteed predictor of future performance. The first official women’s European Championship took place in 1984, although informal tournaments had been played sporadically in the 1960s and 70s. The first six European championships were contested by just four teams, and it could be argued that the only reason Germany didn’t win the first two was because they did not play.

Throughout the 1990s Germany had a stranglehold on the trophy, and it was one that they would not relax when the number of teams increased to eight and then to 16. In fact, they only missed out on the trophy in 1993 and 2017.

Portugal approaches the tournament from a diametrically opposite perspective. Far from being expected to win, the team would not even have qualified but for Russia’s exclusion, and in its one previous appearance, the team managed only one win in a group match. We’re ready for anything, so let the fun begin. The tournament gets underway on 06 July.