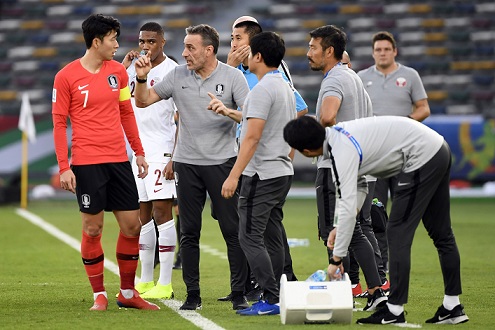 With the countdown clock for the start of the FIFA World Cup 2022 well and truly ticking (Portugal’s opening game at the tournament is just ten days away), PortuGOAL will this week be taking a look at the Seleção’s Group H opponents with the help of local football experts from the three nations in question.

Ones to watch - Who are South Korea’s star players?

The obvious names are Son Heung-min and Kim Min-jae. The former needs no explanation as his status as the Premier League Golden Boot winner just about says it all. The latter is the new superstar of Korean football after his recent move to Napoli. His performance in the Serie A and the Champions League have been phenomenal. He’s also the first central defender from Korea to play a prominent role for a big European club.

Another player that I would suggest to keep an eye on is central midfielder Hwang In-beom, who’s likely going to play a similar role to the one that Bernardo Silva plays for Portugal. Hwang will be expected to be the catalyst in midfield for Korea both going forward and also defensively.

Paulo Bento has introduced a distinct style of play for Korea. Their football, at least until now, has been based on driving up possession, pinning the opposition back and looking for solutions to unlock defences by moving the ball from side to side. Korea are also pressing much higher under Bento, and one of their biggest strengths is the ability to attack the opposition box quickly after winning the ball.

Korea’s weak link at the moment is situations when their high press breaks, their defensive shape collapses quite easily and they become vulnerable in transition. Because of this, Bento has been experimenting with several changes, such as deploying a double six or opting for a back three, since the end of Asian qualifying as Korea started to face stronger opponents in friendlies.

Formation and playing style – what system do South Korea usually play? Would you describe them generically as an attacking or a defensive team?

Throughout Asian qualifying, Bento has mostly deployed a 4-3-3 or 4-2-3-1 as Korea played in games that allowed them to enjoy a large portion of possession. Since June when Korea began facing stronger opponents, Bento has been toying with a 4-4-2 diamond or formations supported with a back three, presumably to prepare the team for the World Cup where they won’t likely have 60% or 70% possession.

It’s difficult to say Korea are attacking or defensive, because whilst they’ve been a proactive side under Bento, they’re also not a high-intensity, high-scoring side. If I had to put a label on their brand of football, I’d call this team  “proactively controlling.”

Mood in the camp – do you think South Korea come into the World Cup in a confident frame of mind?

I’ve spoken a few people in and around the camp, and also based on Bento’s press conference recently when he announced the squad this past weekend, I’d say this team is in a far better shape compared to 2014 and 2018. The team has also gotten younger with players that are more capable of playing more ambitiously.

The public has been quite critical of Bento’s conservative player selection, but the players seem to have unconditional respect and support for him.

What was the reaction in the South Korean media and among the fans to the World Cup draw?

While most Koreans acknowledged that this is a difficult draw, the general reaction was that the worst-case scenario has been avoided. Depending on luck, Korea could have very well been in the same group with Germany and Spain, which would’ve been a disaster.

That’s not to say that Group H is an easy draw for Korea, though. Both Uruguay and Portugal are world class teams and Korea will face them as clear underdogs.

My head tells me that it’s going to be extremely difficult for Korea to edge out Portugal or Uruguay for a place in the top two, but at times, World Cup matches are won with heart. I’ll go with my gut feelings, or maybe just with a patriotic hat on, and say that Korea will finish second behind Portugal to set themselves up to face Brazil in the last-16. Portugal first, Korea second, Uruguay third and Ghana fourth.

Bonus question: What is the overall assessment of Paulo Bento and the job he has done as South Korea manager?

Opinions on Bento are quite divided, but Korea is almost always a socially and politically divided country. One thing is certain. Between 2010 and 2018, Korea had to appoint six different national team managers in the backdrop of the team struggling mightily in terms of results and barely qualifying for both World Cups on the last day of Asian qualifying. Korea qualified in 2014 and 2018 despite being unable to win the last game of qualifying, thanks to results of other teams turning out in their favour.

Bento is the first manager in the history of Korean football to have managed the national team for the entirety of the four-year cycle for a World Cup. Korea also qualified quite comfortably for the first time in over a decade. That being said, the World Cup requires a different style and level of performance compared to Asian qualifying. The hope is that Bento’s experience will enable Korea to cope with that pressure. Regardless of the result at the World Cup, though, I will be grateful to Bento as he has laid out the groundwork for Korea to build on for years to come.

Our thanks to Steve. To keep up to speed on all things South Korean football, be sure to follow Steve Han • 한만성 on Twitter.

Portugal don't usually do well with high pressing or possession based teams. WE don't seem to match the intensity of the pressing, and allowing teams to keep playmaking they will eventually score.

We need to lead with the intensity.

have you been watching our games?

Santos thoroughly enjoys having everyone back, chilling, absorbing attack.

We did it with Spain and that cost us a place in the Nations League finals, we did it with Belgium, we know how that ended...all...

have you been watching our games?

Santos thoroughly enjoys having everyone back, chilling, absorbing attack.

We did it with Spain and that cost us a place in the Nations League finals, we did it with Belgium, we know how that ended...all signs point to nothing changing.

We all know the SK plan is going to be foul them at every attack. Thats what they do, its unwatchable crap.

Bento knows exactly that Santos‘ Portugal struggles against high press. I strongly believe that he might try to replicate the recipe that he himself opted for in Portugal‘s 2012 semi final against Spain. Because it was really on the edge of a win...

Bento knows exactly that Santos‘ Portugal struggles against high press. I strongly believe that he might try to replicate the recipe that he himself opted for in Portugal‘s 2012 semi final against Spain. Because it was really on the edge of a win for Portugal. Extremely high press until into the oppositions box. Portugal defenders have to be flawless in passing. Composure and a certain physicality will be needed especially in DM & CM. William should be in if fit. In offence, this could be a game for Felix. Because he is a „Fantasista“ and because Bento will not expect him to start. All also depends heavily from the situation in group H at this stage…