Portugal 3-2 Ghana match reaction: “It was a difficult victory but a deserved one” – Ronaldo 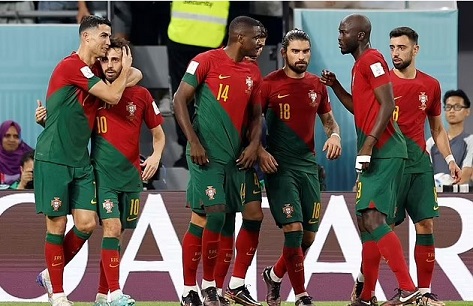 Just like in Russia 2018, the Seleção opened up their World Cup campaign in Qatar with a thrilling spectacle.

Despite recognising the difficulties caused by Ghana, the mood in the Portugal camp following the 3-2 victory over the African nation was unanimous: job done, let’s prepare for the next one.

PortuGOAL rounds up all the match reaction.

“Portugal dominated the first half. But we were not as incisive as we could and should have been. Only in the last 15 minutes did we manage to quicken the pace and get into dangerous positions, with more variety and creativity. Up to then we controlled the game, but lacked the fluidity and creativity that we showed in our last game and which my players are capable of. You have to give credit to Ghana too, who shut down spaces, but we could have done better in the first half.

“In the second half we scored and from then on the game was up and down. Ghana scored from what I think was their only chance, but they had merit in that. We reacted well, scored two goals, and when we were 3-1 up, with two minutes of normal time left, this team – which has the ability to keep hold of the ball and steal it from our opponents – put ourselves in the firing line. But okay. Now it’s time to rest and reflect. We’ll talk about this game, the very good things we did and the less good moments.

“Tomorrow the players will have the game showing in their rooms. This is one of the techniques we use. So each player can think on his own. Then we will talk about what happened in the match together as a group. It was such an exhilarating end to the game that if you ask me to describe the goals I couldn’t. And the same thing happens with the players.

“Did some players leave the field with their heads down? They’re professionals and it’s normal that one or other was a little disappointed, but they have to lift their heads because Portugal won and they have to say to themselves: “Ok, I didn’t do this very well. I know I can do better.” And look ahead, because we won the game which is the most important thing.”

“Spaces only appear if we make the right movements. There is the correct timing for each move. We scored good goals, and for the penalty it was a great move between João Félix and Cristiano that led to the penalty that gave us the lead.

“We were a bit nervous which is normal for the first game, and the difficulties that Ghana caused us. It was a team that we knew would cause us lots of problems. At the end of the game they pushed more players up. We could have scored another goal or two on the break. We didn’t, but we defended the result and that’s what was important.”

“We wanted to start with a win, but regardless of the results of the other teams, we have to do our job. That’s what we can control: our games and the points we win. Now the focus is on the next game.

On scoring for fifth consecutive World Cup: “It was a beautiful moment in my fifth World Cup. We won and we have started well. It was an extremely important victory. The first match is fundamental in these tournaments.

“Plus the record. Being the only player to score in five successive World Cups makes me very proud. I’m very happy with the excellent display of the team. It was a difficult victory, but a deserved one.”

“It’s a sensation of relief [to score a goal], given everything that’s happened this season. I do my job, I always try to help my club, and in this case the Seleção. I never take it easy, despite some people thinking otherwise. I always do my job and try my best to make the fans happy.

“It’s a moment of enormous joy. I could only think of my family, my friends. I can only imagine how they were. My mother must have had a heart attack!

“In a World Cup all the teams are strong. There are no easy teams. It’s up to us to make the games easier.”

“At the end it was tough, but the most important thing was to win. Now we’re going to focus on the next game. If we win our next game we are through to the next round. We’re on the right path.”

“I was focused, I knew what I had to do. The important thing was to give my all, because the game was wide open at that moment. I came on and I had luck.”

On last-gasp scare: “I saw what happened. Nobody expected that to happen, but we all have full confidence in Diogo. He’s a great goalkeeper, who has saved us many times. We’re always with him.”

On being a starter: “It’s up to the coach. If I’m a starter, I’m ready to help my team. But if I start on the bench, I’ll do the same. The most important thing is to help the team.”

On next opponents: “We saw a little of the Uruguay-South Korea game. They are two strong teams. Now we have to turn our mind to the next game, against Uruguay, who have forwards of the highest quality.”

“We’re disappointed, especially as we played a good game and had good ball possession. It’s true we also had to defend a lot. Portugal scored a goal when the referee decided to award a penalty.

“We knew it would be tough, but we were brave and we tried everything possible. We scored two goals and we almost equalised. We were a bit unlucky. We made mistakes in the second and third goals, but we lacked luck.

“We could have earned points, but the referee didn’t help. Maybe Cristiano Ronaldo had a bonus because he is a star. You have to ask the referee, because it was a body-to-body challenge in the area. I don’t know if VAR was paying attention, or the referee, but if we see the images it was a foul against us.”

Nelly
This comment was minimized by the moderator on the site

The Ghana coach and many pundits have pointed to the penalty as being soft but the media in general has ignored the goal that was caulked off for an egalitarian questionable foul. To me it was a make up call. Anyways I hope the team cleans up...

The Ghana coach and many pundits have pointed to the penalty as being soft but the media in general has ignored the goal that was caulked off for an egalitarian questionable foul. To me it was a make up call. Anyways I hope the team cleans up the brain farts in the next game. If they can keep focused the sky is the limit.

Yeah, the level of contact was similar on both occasions. Ghana can't take a soft foul for the first half goal and then bemoan a soft penalty in the second. Not sure we'll get that decision against the big boys though.

AntiSantos
This comment was minimized by the moderator on the site

You all might be happy because of this win, but I am not. Portugal played the worse FIFA team in the tournament and barely beat them. Once again, Fernando Santos drives a Ferrari like a VW Beetle. Portugal played right into Ghana’s hands in the...

You all might be happy because of this win, but I am not. Portugal played the worse FIFA team in the tournament and barely beat them. Once again, Fernando Santos drives a Ferrari like a VW Beetle. Portugal played right into Ghana’s hands in the first half with the slow pace of game passing the ball back and forth with minimal attack. Ghana was happy to play this game as indicated by their time wasting. Secondly, why in the hell was Guerreiro starting against a team with speed on the wings? Why was Octavio starting when all he did was kill the flow of Portugal’s attacking game? Why does Fernando Santos wait until the 74th minute to make (2) sub changes. WTF! Those subs should have been made at half time or at least by the 60th minute. Fernando Santos played Ghana as if he was playing Argentina or Brazil. Portugal should have treated Ghana like England treated Iran - like a pub team. Against Uruguay I am sure Santos’ game plan will be to play for a 0-0 tie and more of the same nail biting boring performance game plan like Ghana. If Portugal keep playing not to lose, like Ghana played, they are not going anywhere and will lose. Enjoy the win since I suspect it’s the last one to enjoy. Hopefully when Fernando Santos gets fired the federation doesn’t just hire another archaic talent killer because he coached Ronaldo at the youth level…

I'm sorry but Qatar are the worst team. There are also other between Qatar and Ghana. I get the coaching was bad but lets watch Ghana against Uruguay or Korea to see just how easy they are to beat.