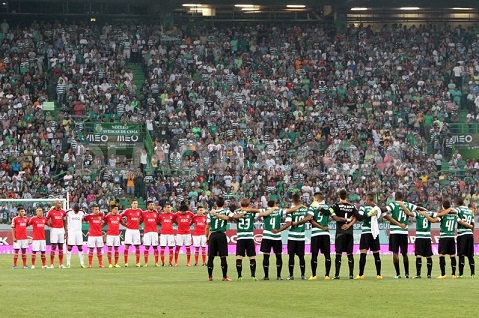 Portugal is bracing itself for some atrocious weather conditions over the next few days, and Friday night could prove a stormy affair in the Primeira Liga, with potential for a heavy influence on the outcome of this season’s title race.

At 7.00pm Porto welcome Braga to the Estádio do Dragão. Soon after the final whistle sounds in the north, the Lisbon derby will kick off as Sporting host league leaders Benfica. Four points currently separate the top two. Will that be the case by the end of tomorrow night? PortuGOAL previews what promises to be an exciting night of football.

Sérgio Conceição’s men continue to show fluctuating form, but results have been almost perfect over the past two months. The Dragons have won 12 and drawn 1 of their last 13 matches, including the morale-boosting victory in Lisbon against Sporting two weeks ago. The fiery coach has been adamant all season that his side will reclaim the Portuguese championship, and this weekend could be the chance to make up ground on their title rivals from the capital.

Indeed, given the fierce pace set by Benfica this season – 14 wins from 15 games in the Primeira Liga – Porto have done well to keep the points gap between the two sides relatively low. If results go their way, Porto could be within striking distance of Benfica at the end of the night, with the campaign reaching the exact halfway stage, and with Benfica to visit the Dragão in early February.

Before that though, Porto have the small matter of Braga standing between them and three points. The Arsenalistas pulled off a surprise over the festive period, sacking coach Sá Pinto despite the manager having orchestrated a brilliant campaign in Europe. Pinto paid the price for poor form in the league, and the new man in the dugout, Rúben Amorim, has made a good start in attempting to right that wrong, winning his first two games in charge 7-1 versus Belenenses and 2-1 against Tondela.

Rising star Francisco Trincão is starting to fulfil the high expectations deposited in him ever since he shined so brightly at youth level for the national team, and with former Porto winger Galeno enjoying a positive debut season, dangerman Ricardo Horta increasingly staking his claim for a full Portugal call-up, not to mention in-form striker Paulinho, Braga have no shortage of firepower.

Nevertheless, Porto will start the match heavy favourites, not least because of a formidable home record of 7 straight wins in the league in 2019/20, scoring 18 goals and conceding none. Factor in the recent history of this fixture, where Braga have avoided defeat only twice in the last ten seasons (two draws) and the size of the task facing the visitors becomes apparent.

Porto will be without Shoya Nakajima, the Japanese playmaker picking up an injury against Varzim in midweek, and centre-back Pepe faces a late fitness test. Braga are at full strength for the game.

Porto coach Sérgio Conceição: “I expect a good game of football, in front of a full stadium. There are three important points at stake. The margin for error in the Liga is very small. We were champions with 88 points, but 85 wasn’t enough.”

Braga coach Rúben Amorim: “We’ll be facing a team that is strong in all aspects of the game, full of players who can win a match at any time, but we’ll be walking onto the pitch with victory our aim.”

The Sporting-Benfica match will be broadcast live by FreeSports TV. For details click here or on the image below.

Never has a Lisbon derby been played in the first half of the season with such a gaping chasm between the two city rivals. Benfica are a massive 16 points ahead of Sporting. Nevertheless, given the always fiery nature of this fixture and a strange quirk of recent years whereby the team lower in the standings has often come out of top, the Eagles will know they cannot go into the match thinking it is a done deal.

All indications point to the match being the final one in Sporting colours for captain Bruno Fernandes, before his transfer to Manchester United. The midfielder has been a talisman for the Lions, carrying the team for most of his two and half seasons at the club during which time he has averaged a goal every two games. And Fernandes will be keen to repeat last season’s heroics against Benfica in the Portuguese Cup, when two brilliant goals – one in each leg – saw Sporting edge out the Eagles in the semi-final on their way to conquering the trophy.

It goes without saying that if Sporting are to get one over their neighbours, Fernandes will more than likely be at the heart of it, especially as skilful Argentine forward Luciano Vietto is out injured. That is not where Sporting coach Silas’s selection headaches end, as Sebastián Coates also misses the match through suspension. Luís Neto is expected to deputise.

Benfica, on the other hand, face an entirely different kind of the problem – the type that coaches generally like: an abundance of options. New German midfield holder Julian Weigl was immediately thrust into the team by coach Bruno Lage, first for suspended playmaker Adel Taarabt against Aves, then for injured anchor-man Gabriel against Rio Ave. Both players are now available, leaving Lage with an interesting conundrum in midfield, given that Pizzi and Cervi are both in fine form. Centre-back Ferro has shaken off a knock and is expected to play.

Sporting coach Jorge Silas: “This match is clearly much more than three points, both for us and for Benfica. It’s a game that shakes up Portuguese football, it has a very emotional side, full of passion.”