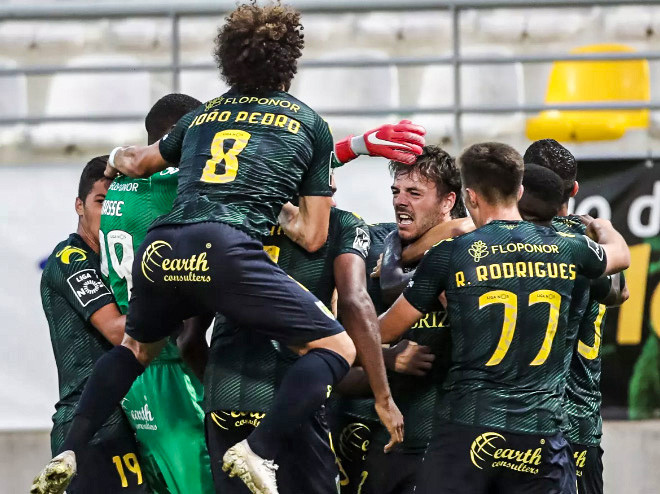 Sporting have missed the chance to secure automatic qualification for the Europa League after Tondela’s 1-0 victory over fourth-placed Sporting de Braga paved the way for the Lions, following up the shock result with a 0-0 draw at home to Vitória de Setúbal instead.

Deep in the relegation battle, Tondela edged themselves a step closer to safety, sitting three points outside of the drop-zone going into the final fixture of the season after beating Braga on Monday night.

The victory opened up the prospect for Sporting, requiring just two points to confirm their presence on the Primeira Liga podium, but an important point for Setúbal, also involved in the fight for survival, took the Sadinos a point above relegation-threatened Portimonense and left the Green & Whites still within touching distance of Braga ahead of the Lisbon derby versus Benfica.

Elsewhere, FC Porto marked their last home game of the season, complete with lifting of the Liga NOS title, with a 6-1 thrashing handed to Moreirense before Benfica’s 4-0 win away to a sorry Desportivo das Aves side. Here's the peak of the action from the penultimate set of fixtures of the season.

Graced with a negative result for Portimonense away to Paços de Ferreira, victory in their next game would gear Tondela up for another late escape from relegation, requiring a win versus Braga first to go three points clear from the drop zone.

Pepelu came close to cracking the deadlock for the hosts with a free-kick just wide before Ricardo Horta’s 30th minute strike, hitting the post, swung the pendulum in Braga’s favour. The visitors neared the opener on a couple more occasions, threatening from the back-post through Rui Fonte and Paulinho, but neither could provide the route to goal in a goalless half.

A slower second half worked in the Auriverdes’ favour, who almost caught Braga out on the hour-mark through a counter spear-headed by Jhon Murillo’s chance, chipping the keeper before shaving the post himself.

The all-important moment fell to Tondela captain Yohan Tavares who was on hand to turn in the winner from close range in the 74th minute, despite a late-red card for Filipe Ferreira. Victory for Naxto González’s side places them three points from safety, with Braga left susceptible to falling five behind Sporting going into the final day of the season, with champions Porto still to come.

Without Andraž Sporar and Jovane Cabral to lead the line, Ruben Amorim sought answers from new combinations in Sporting’s bid to win and lock up third place ahead of the final fixture of the season, welcoming Setúbal to the Alvalade.

The first half was far from what the Lions had hoped in their final home fixture of the season as Litos Vidigal’s side stifled an uninspired attack for the duration of the opening 45 minutes.

Sporting were no better in the second half, producing just one effort from Marcos Acuña capable of stinging the palms of Giorgi Makaridze in the 66th minute.

The worst was almost reserved for stoppage time for the Europa League hopefuls, giving up possession to Zequinha inside their own box before a tame effort from the forward, into Luis Maximiano’s grasp, summed up a bore draw.

With the title already clinched, Porto’s last home game of the season had party ribbons all over it, but Moreirense looked keen to dampen the celebrations when cancelling out Luis Diaz’s opener with a 20th minute Fábio Abreu equaliser, lighting the game up with an early 1-1 score-line.

Porto developed a taste for fast starts, however, scoring twice coming into the restart and setting up a 3-1 lead via Otávio and an Alex Telles spot-kick, still before the hour-mark.

Moussa Marega weighed in on the action with the Dragons’ fourth from a free-kick before a wonderfully-worked move, crafted by a Diaz backheel and crowned with a Tiquinho Soares tap-in, took the score to 5-1 in the 78th minute.

There was still time for one more goal and it’d be Soares’ to finish again, for his brace, marvelling at the Diaz-to-Otávio combination for a second time before doing the easy part and landing a sixth for Porto.

Marred by financial and administrative issues, the future of Aves in the professional scene has been placed in huge doubt, but extra efforts to pay off relevant insurance fees took the club one step closer to at least completing the season on Tuesday night, hosting Benfica.

Aves marked the fixture with a powerful one-minute protest at the beginning of the encounter, watching on as Benfica traded passes harmlessly inside their own half, but the Eagles wouldn’t take long to get serious, going a goal ahead through Rafa Silva after just four minutes.

After setting up the opener, Pizzi added one more goal to his healthy tally of 18 for the season, scoring from the spot and leaving the game firmly in the visitors’ hands in the 52nd minute.

Away from the Aves demise, the night also belonged to young Gonçalo Ramos, coming off the bench to land a brace on his debut, scoring first in the 87th minute before laying the score to rest at 4-0 with a routine finish inside the box, a minute from full time.

I find it amusing some people (i'm not pointing fingers) are trying to reduce Porto's achievement of winning the title. Disrespectful. Yes theyre hardly 2004 vintage but quite a few of their players will go on to play at a higher level in bigger...

I find it amusing some people (i'm not pointing fingers) are trying to reduce Porto's achievement of winning the title. Disrespectful. Yes theyre hardly 2004 vintage but quite a few of their players will go on to play at a higher level in bigger leagues - Danilo, Telles, Leite, Corona for example.

However as a general point I do think the standard of football has dropped these past few seasons Europe-wide (and International) so why should Portugal be any different? The only difference is the richer teams/leagues can spend to rectify this whilst the Portuguese teams have to try to find the new talent.

No doubt Benfica will be better next year and Porto have been playing younger players these past few games so they have some hope but you only have to look at a team like Atalanta so see how its done if you are consistent and patient with your team/manager - maybe Sporting should look at this.

Dude, as a Porto fan, it's hard to defend the garbage displays under Sergio Conceicao. He has a very limited understanding of tactics and it's obvious watching Porto these last 3 seasons.

The players aren't that bad, considering Porto was...

Dude, as a Porto fan, it's hard to defend the garbage displays under Sergio Conceicao. He has a very limited understanding of tactics and it's obvious watching Porto these last 3 seasons.

The players aren't that bad, considering Porto was hampered by Financial Fair Play this season. Uribe and Luiz Diaz being 2 new standouts. But generally, the Sergio philosophy has been to run forward as fast as possible and hope something works out.

If that doesn't work, draw a foul or get a corner and score off a set piece. If Porto want to improve, they need to get rid of Conceicao and go get Leonardo Jardim and invest in some new players as well as the academy kids.