Early waves made in the Primeira Liga transfer market 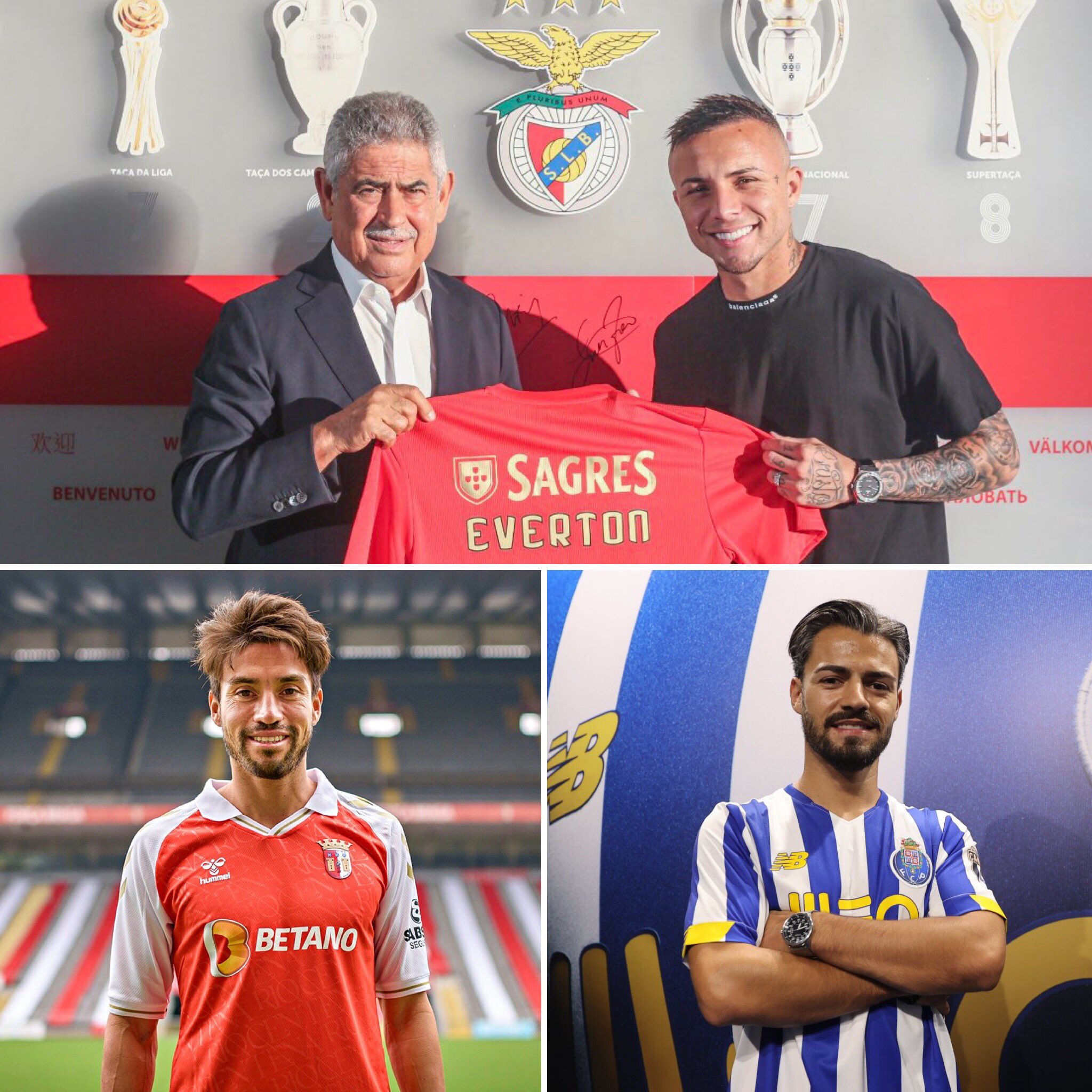 With the memories of last season still fresh in the minds of all, those in command of Primeira Liga outfits have done a stern job of diverting attentions towards the new campaign as new managerial appointments and some of their most-wanted acquisitions begin to walk through the door.

Dominating the news have been Benfica after the return of Jorge Jesus, with the Eagles set to be the most active club in the market in their bid to dethrone FC Porto as champions. The Dragons haven’t stood still either in these early stages of the transfer window, meanwhile the likes of Sporting, Sporting de Braga, Rio Ave and Vitória de Guimarães all layout plans of their own to close in on the habitual leaders of the pack.

With the market set to intensify in coming weeks and months, here’s some of the business already made amongst the 18 Liga NOS clubs, alongside a few more deals on the cusp of being made.

With a presidential election in October looming off the back of an unflattering season, Luís Filipe Vieira has resorted to mammoth measures in a bid to reconquer the overwhelming support of the Benfica fan base, starting with the controversial, but otherwise fruitful link-up with Jorge Jesus.

The ex-Sporting and Flamengo boss attracted a plethora of names as a result of his move back to Portuguese shores, many of which belong to the current Brasileirão and Copa Libertadores champions, but it’s in Grêmio’s star man Everton Cebolinha, for a fee worth €20 million, that Jesus will see the biggest financial effort go towards in the Brazilian market.

Everton joins Pedrinho, formerly of Cortinthians before agreeing to a €20-million-switch in March 2020, and Gilberto from Fluminense in a triple swoop of the Brazilian first division. Meanwhile goalkeeper Helton Leite also adds to the Brazilian contingency for an undisclosed fee from Boavista.

The experience of Tottenham Hotspur centre-back Jan Vertonghen comes to bolster Benfica’s defence on a free transfer, while the lengthy pursuit of Freiburg striker Gian-Luca Waldschmidt was brought to a satisfactory end by a €15 million deal which attaches the 24-year-old to the Lisbon outfit on a five-year-contract.

But, without a doubt, the name carrying the biggest traction is that of ex-Paris Saint-Germain goal-getter Edinson Cavani, currently a free agent at the age of 33 after his contract with the Parisiens expired at the end of June.

After talks reportedly hit a wall, belief is that Benfica could land the Uruguay international on a hefty two-year-contract in the coming days, beating off interest from Leeds United to complete an already star-studded window.

Without holding the ability to spend as freely as their rivals Benfica, Porto have taken a far more humble approach with their signings, landing two Primeira Liga regulars on mere free transfers, thus far.

Carraça, arriving on a free transfer from city rivals Boavista, boosts the numbers at full-back meanwhile Claudio Ramos, also detaching himself from his club, Tondela, upon the expiry of his current deal, looks set to go toe-to-toe with Augustín Marchesín and Diogo Costa for the goalkeeping spot, landing a three-year-deal with his new club.

Porto’s biggest stories could come via the back door as clubs in Spain and England circle for talents such as Diogo Leite and Fábio Silva, with the league champions supposedly ready to listen to offers.

In deals that are thought to bring in cash in excess of €60 million, Sérgio Conceição’s men are readying funds to try to renew the contracts of Alex Telles, Otávio, Moussa Marega and Sérgio Oliveira - all with less than 12 months left on their current contracts.

Unlike their closest rivals, Sporting are yet to announce a single name ready to be implemented into Rubén Amorim’s plans for the new season, but options, reportedly, are in the pipeline. The Lions are thought to have taken to La Liga to do their shopping, eyeing firstly a move for Antonio Adan, Jan Oblak’s back-up at Atlético Madrid.

Adan, once of Real Madrid and Real Betis, is available on a free and negotiations could now accelerate after Atlético’s recent elimination from the UEFA Champions League, losing 2-1 to RB Leipzig and marking the end of the 2019/20 season for the Colchoneros.

Out to fill the void left by Jeremy Mathieu’s retirement could be Zouhair Feddal from Betis, available for approximately €2million, meanwhile Pedro Porro, representing Real Valladolid and Girona in recent seasons, could strengthen Sporting’s options at right-back on a two-year-loan from Manchester City.

A move for Vitorino Antunes, capped 13 times by Portugal, on a free completes Sporting’s assault of the Iberian peninsula, where they compete closer to home with Porto for the services of FC Famalicão’s Pedro Goncalves and Nuno Santos from Rio Ave.

Under the stewardship of Carlos Carvalhal, making the switch “back home” from Rio Ave, Braga have already begun to move their pieces in the market, headlined by the capture of ex-Benfica star Nico Gaitan.

The wideman, landing a one-year-deal with the Arsenalistas at the age of 32, adds a wealth of experience to the final third following Francisco Trincão’s anticipated departure to Barcelona. Gaitan is also joined by Iuri Medeiros, on loan from FC Nurnberg, where he’ll hope he can capture the form once displayed on loan at Moreirense in 2016, then as a hot Sporting prospect.

Privy to the free transfer market, Braga have fished in Guilherme Schettine from Santa Clara and Al Musrati from bitter rivals Vitória, with Jefferson, once on loan at the club, also linked. The likes of Paulinho and Fábio Martins attract interest on the way out, coupled with handsome fees.

In Tiago Mendes’ first venture as a manager, Vitória has dedicated its transfer program to French football thus far, firstly landing Denis Poha on a permanent deal from Rennes for €300,000.

The name carrying the most intrigue, however, is that of South African striker Lyle Foster, arriving on a deal worth €1.2 million from AS Monaco, who were initially impressed by the bright prospect coming from Orlando Pirates, now 19.

After the success of Marcus Edwards, a revisit of the English market was also due, landing the signing of Jacob Maddox, 21, on a free from Chelsea. Vitória will now be on the hunt to replace first-team regular Davidson, joining Alanyaspor in Turkey for an undisclosed fee, meanwhile Mikel Agu attracts interest from France.

Once tipped for great success at Manchester United, Angel Gomes, now unattached to the Old Trafford outfit, will be hoping he’s remembered for being more than just Nani’s godson, with the hard work starting next season, on loan at Boavista, after joining Lille on a free transfer.

Also attracting an interesting name on loan from Ligue 1 are Marítimo, securing the services of Le Havre product Rafik Guitane after an injury-hit spell at Rennes for the 21-year-old playmaker.

Newly-promoted Farense have also done well to earn their slice of limelight, announcing the signing of Rafael Defendi, starring for Famalicão last season and adding a wealth of experience from the goalkeeping position.

These certainly are exciting times if you are a Benfica fan. I wasn't a fan of the way JJ left us, but no one can deny his quality as a coach. I have no doubt that he will whip this side back into shape in no time, and with the likes of Everton,...

These certainly are exciting times if you are a Benfica fan. I wasn't a fan of the way JJ left us, but no one can deny his quality as a coach. I have no doubt that he will whip this side back into shape in no time, and with the likes of Everton, Waldschmidt, Vertonghen, and potentially Cavani at his disposal, we should have a great chance at reclaiming the league title and hopefully putting up a better showing in Europe.

Waldschmidt's goal-scoring numbers in the Bundesliga aren't anything to write home about, but by all accounts, he is an intelligent, technically gifted second-striker who more than makes up for not being the most prolific goal scorer with his clever movement and creativity. Jonas was the best player in Portugal in the second-striker role, and Joao Felix was the breakout star of the Primeira Liga once Bruno Lage took over. We failed to find an adequate replacement for the second-striker position once he moved to Atletico, and that really hurt us in the long run. JJ's famous for his attack-minded 4-4-2, so hopefully he can get the most out Waldschmidt in that role.

Everton walks right into the starting 11 as our left winger. He's not quite as explosive as Rafa, but his 1v1 dribbling ability is world-class. I still see Rafa playing a key role either as our right winger or as an impact sub, but there is no doubt that Everton is the better option, especially when we're going up against stubborn defenses that sit back and absorb pressure. Rafa is practically unplayable on the counter, but he is nowhere near effective when he has very little space to work with.

Vertonghen is also a brilliant signing. Ruben Dias is an excellent defender, but I feel having to play alongside Ferro (who had a very shaky sophomore season) forced him to take unnecessary risks as he obviously didn't have much faith in his CB partner. Dias, when playing alongside Pepe or Jose Fonte with the national team, has yet to put a foot wrong. He will definitely benefit from playing alongside the classy Belgian veteran. Vertonghen has a wealth of experience, he's an assured defender, and he's excellent with the ball at his feet. He honestly could prove to be an even more important signing than Everton or Cavani (if it does happen).