Sporting and Porto share the spoils in fierce Clássico 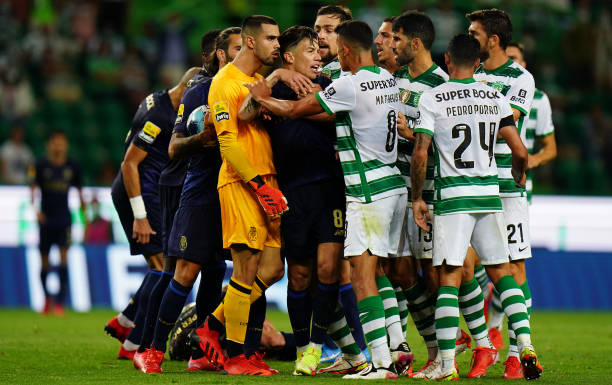 Sporting and Porto were forced to settle for a point apiece after playing out a 1-1 draw tonight at the Alvalade, seeing Benfica solidify their spot at the top of the table.

The Lions, hosting the first Clássico of the season, found themselves ahead as early as the 15th minute via Nuno Santos, deputising for the injured Pedro Gonçalves.

Porto, who’d end the game reduced to ten men after Toni Martinez’s red card, pulled the game back level with Luis Diaz’s strike late in the second half, seeing both sides slip four points behind of league leaders Benfica, who were victorious against Santa Clara.

Both managers came into the clash with questions to pose, with Rubén Amorim unable to call on the likes of Pedro Gonçalves and Gonçalo Inácio, meanwhile Sérgio Conceição backed the likes of Matheus Uribe, Luis Díaz and Jesus Corona to star after lengthy international-duty travels.

The intensity was present in an opening five minutes that saw three yellow cards registered, as the two sides fought tooth and nail for an early advantage.

With the roar of the crowd behind them, Sporting were able to edge themselves in front in the 15th minute, breaking the deadlock through Nuno Santos after the winger diverted Pedro Porro's low cross past Diogo Costa.

The Dragons’ response was instant, almost taking full advantage of slack play from Zouhair Feddal at the back to set Corona up for a free header inside the box, prior to the Mexican’s wayward effort.

On the half-hour mark, Nuno Santos had a second for himself, as well as Sporting, in sight after being played through by Jovane Cabral, but a strong stop with his feet from Diogo Costa kept Porto within touching distance of the Lions.

It was take two for Nuno Santos just moments later after Chancel Mbemba gave the ball away high up the field for Matheus Nunes to construct, but again Diogo Costa came out on top as the Sporting winger opted to pull the trigger early.

Both sides emerged from the interval just as hungry as the referee totted up the fouls, as well as cards. From a set-piece, Porro looked to leave his mark, firing dangerously against the side-netting in the 56th minute.

In the 71st minute, Porto were finally able to land a solid blow after Luis Díaz was found by a cross-field ball from Corona, bringing down the pass before cutting in and picking his spot with a well-placed effort to make it 1-1.

Sporting sought a response from Paulinho, fed by a cross from Porro before looping a header at goal in the 73rd minute, but Diogo Costa was alert to the ex-Braga man’s attempt.

There was trouble over the horizon for Porto, forced to play out the final moments of the Clássico down to ten men after Toni Martinez saw a second yellow card given for planting a high foot on Sebastian Coates’ arm.

With little energy to crack through a re-organised Porto backline, however, the two Portuguese giants settled on a 1-1 draw, giving Benfica a four-point advantage over both at the top of the Primeira Liga.

Struggling to understand why on earth, with Wendell (who has yet to see any action), and Manafa as viable left-backs, Conceicao has ingeniously decided to place the plodding Marcano in left back the last few games.

While Sporting had a leg up...

Struggling to understand why on earth, with Wendell (who has yet to see any action), and Manafa as viable left-backs, Conceicao has ingeniously decided to place the plodding Marcano in left back the last few games.

While Sporting had a leg up in the 1st half, it was only the acres of space that slowjam Marcano gave Porro, that allowed for Sporting's goal.

Sporting were better in the first half while Porto were the better team in the 2nd half before Toni Martinez lost his mind and did his best Bruno Alves impression.

Overall, Porto had more possession while Sporting were more dangerous with their chances. One can't help but think that if Pote were playing, Sporting were likely to walk away with the 3 points.

- Conceicao unnecessarily shoots himself in the foot with stupid selection choices
- Conceicao's bread and butter has been the 4-4-2, and while it has been effective, it wouldn't hurt for him to utilize other formation options like even a 4-2-3-1, where he could benefit from Fabio Vieira's creativity in that #10 role
- Amorim has instilled some real grit in this Sporting side, seen with Palhinha, who is superb (and has a fabulous passing game that is underappreciated), and Nuno Santos.
- Diogo Costa has long been on my radar and I think in him, Porto have a new Baia, if they actually invest in keeping him in the team long-term
- at 40, Pepe is not only the best CB in the Portuguese League, but based on his current form, the best CB in the world right now.