COVID-hit Belenenses eclipse week of triumphs for ‘the Big Three’ 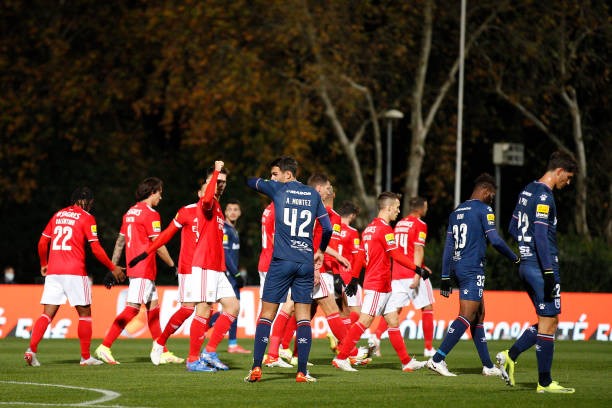 Sporting and FC Porto have held onto the Primeira Liga top spot after Benfica’s abandoned clash versus the heavily depleted and COVID-hit Belenenses SAD, brought to an end as the Eagles led by 7-0, dominated the headlines.

The spread of COVID in the Belenenses camp forced the Belém outfit to field just nine men, including two goalkeepers, versus Jorge Jesus’ men on Saturday night.

In merciless fashion, Benfica put seven goals past their opponents before half-time with a series of injuries reducing Belenenses’ numbers down to six players, bringing the one-sided game to a premature end.

Sunday night saw goals from Pablo Sarabia and Paulinho ease Sporting’s match-up against Tondela in Lisbon with a 2-0 victory before Porto matched their title rivals with a 2-1 win against Vitória at home.

The story was being written way before the two sides even set foot on the hallowed turf of the Jamor, and when they did, Belenenses turned up with just nine players from kick-off.

Belenenses were a goal down early off the back of a Kau own goal before Haris Seferovic, keen to make amends for his Camp Nou nightmare, grabbed goal number two.

A Julian Weigl belter was followed by a couple of Darwin Nuñez goals, with the Uruguayan completing his hat-trick moments after Seferovic made it 6-0 from the spot. From the restart, a fallen João Monteiro signalled the end of the tale in Lisbon, with the referee forced to abandon the game due to the lack of outfield players.

Abandoning a game halfway through will certainly not happen when playing at onlinecasinogames.co.nz, with plenty of enticing prizes up for grabs.

With the realities of covid, albeit rather minimal in comparison to Belenenses, also touching base with Tondela, Sporting came out in front of their home support in hope of following up their Champions League Last 16 qualification with another victory at Alvalade.

Pablo Sarabia took advantage of a Tondela interception to finish off an effort amidst calls for offside by the visiting corner, putting Sporting 1-0 up in the 10th minute with the VAR’s blessing.

The Lions endured a quieter half in the wake of their opener before bursting out of the blocks in the second half for another early goal, this one gifted to Paulinho by Pedro Gonçalves for a 50th minute tap-in.

An injury to João Palhinha sparked worries in the Sporting dugout after the midfielder was forced to hobble off in tears ahead of next Friday’s Lisbon derby away to Benfica.

Porto were made to approach Matchday 12 with increased caution after the absentees of Pepe and Ivan Marcano coincided with the reception of Vitória, desperate to kick on in their stagnant start to the season.

The task was made trickier for the hosts by a foul on Marcus Edwards inside the box, just past the half-hour mark, resulting in a penalty for the Englishman himself to convert against Diogo Costa.

Luis Díaz issued the perfect response in the 38th minute as he cut in on his favoured right foot before slamming in the equaliser in off the far post, leaving the goalkeeper helpless. The two teams took to the half-time break level but the balance of the game tilted soon after Abdul Mumin’s red card in the 53rd minute, giving Porto the numerical advantage.

The Dragons were quick to punish their opponents via Evanilson’s tap-in just six minutes later, completing the turnaround for the hosts who attain top spot once more, alongside Sporting, with a 2-1 victory.

Belenenses v Benfica. Unbelievable. Those people in that country deserve better than that backwater

Its a total mockery of la liga Portuguese to play a game with 9 players.

How can the Federação Portuguesa de Futebol allow such a match during pandemic or otherwise farce majeure .

Does the Federação Portuguesa de Futebol has any set rules for...

Its a total mockery of la liga Portuguese to play a game with 9 players.

How can the Federação Portuguesa de Futebol allow such a match during pandemic or otherwise farce majeure .

How can a team like Benfica accept a challenge to play, do they have a moral or respect for other team Belenenses.

Benfica team is anopportunist team, rather playing a fair game with 11 players.

Wow what a joke! This is why there is so much hate and bias towards the "big 3" corruption at the highest level to even ENTERTAIN this stupid idea but to go through with it??

Wow, this happened in a professional sport, what a joke.

Read More
Neville
There are no comments posted here yet