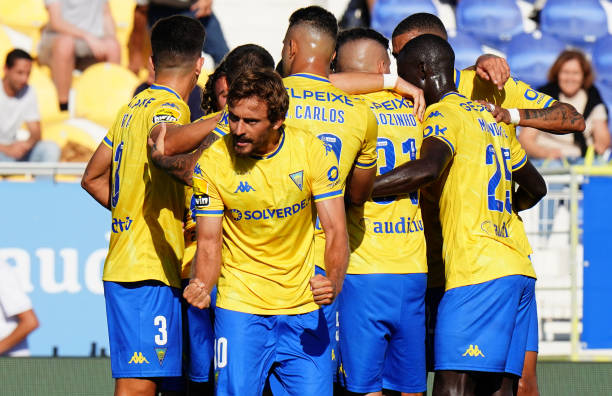 No more than seven weeks later, the Portuguese Primeira Liga was back in our cities, towns and living rooms to promise boundless joy and drama.

Benfica kicked the season off with a 4-0 win versus Arouca before FC Porto commenced the defence of their league title by thrashing Marítimo 5-1 at home.

The ‘main event’ between Sporting de Braga and Rúben Amorim’s Sporting also delivered, providing a thrilling 3-3 draw, but this wasn’t even half of the action on show as Estoril, Famalicão, new boys Casa Pia and Chaves and main-stays Vitória and Boavista all entertained the nation. Here’s how they fared…

On Nélson Veríssimo’s debut as Estoril manager, the former Benfica caretaker was out in search for all three points against former Primeira Liga sensation Famalicão, themselves keen to return to their old ways.

After just 20 minutes of football, however, the tone for the game was set as Francisco Geraldes placed the hosts 1-0 up after a handful of threats going Famalicão’s way.

On the stroke of half-time, Estoril found themselves two goals up via Arthur, fed through on goal by new signing Tiago Gouveia before rounding the goalkeeper and tucking home.

Rui Pedro Silva’s team-talk at the break clearly moved the boys from Famalicão going into the second period, leaving the visitors a Dani Figueira penalty-save away from halving their deficit in the 53rd minute. The missed opportunity from the spot paved the way for a 2-0 Estoril victory.

The highly positive start for Estoril and especially Tiago Gouveia’s superb debut will give the team from the Lisbon coast plenty of optimism for the upcoming season, and placing an apostas online bet on the Yellow and Blues to prosper in 2022/23 could prove a profitable venture.

Putting an end to an 83-year-wait, Casa Pia made their presence felt in their Primeira Liga opener against the tricky Santa Clara away from home.

Just ten minutes in, the newly-promoted side could’ve been celebrating their first goal as Leonardo Lelo stood over the penalty spot, only for the full-back to lose his duel against Marco Pereira and miss.

Key signing Rafael Martins then came inches away from bagging on his debut with a glancing header, but this time it was the post that stood to deny Casa Pia.

Santa Clara ended the game reduced to ten men after a nasty challenge from Ricardinho, but it still wasn’t enough for Casa Pia to tip the balance in their quest for a dream start, as the two shared the spoils.

With a certain degree of turbulence, a seemingly cash-strapped Vitória kicked off their season away to Chaves, back after a two-year top-flight absence. The hosts had the ball in the back of the net as the end of the first half neared, but João Mendes’ initial strike was agonisingly ruled out for offside.

Chaves’ pain was compounded by Vitória’s André Silva, striking back just before the half-time whistle with the visitors’ first of the night. Not to be deterred, the Flavienses continued to come at Vitória before gradually running out of steam in the second period.

The Primeira Liga staples even found themselves down to nine men after red cards to Alfa Semedo and Matheus Indio, but the sending-offs did little to revitalise a defeated Chaves side.

After avoiding an end-of-season relegation scrap last campaign, Portimonense will at the very least be hoping for much of the same this year, alongside the like-minded Boavista, standing between them and a positive start to the new season.

The Panteras Negras started brightly with a goal as early as the 9th minute, claimed by Yusupha Njie after a powerful run and finish past the coveted Samuel Portugal.

Portimonense tallied up the efforts against Rafael Bracali’s goal at the other end, without success, throughout both halves in a game that was concluded by a second goal for Boavista, eventually chalked off for offside.