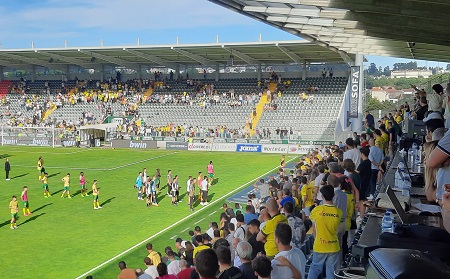 Paços de Ferreira slumped to a sixth straight defeat after losing 3-2 to Casa Pia at Estádio da Capital do Móvel. Adrián Butzke scored in the 17th minute to give César Peixoto’s side a half-time lead but the beavers couldn’t close it out.

The hosts undid all their good work in the second half, Saviour Godwin and Ângelo Neto scoring in the space of two minutes after capitalising on sloppy turnovers. Romário Baró teed up Clayton who extended the lead in the 74th minute.

Mauro Couto headed Antunes’ cross into the net deep into added time, but it was too little too late for Paços with Peixoto’s position looking more fragile than ever.

Paços de Ferreira created the first chances on a sunny afternoon in the furniture capital of Portugal. Matchoi Djaló’s shot was defected for a corner from which Adrián Butzke headed over the bar.

Casa Pia got into the contest, Saviour Godwin testing Igor Vekic before Rafael Martins missed a great opportunity. Afonso Taira’s long ball released Lucas Soares who got behind Uilton, his cross picking out Martins who couldn’t connect with a goal going begging.

It proved to be a costly miss with Paços de Ferreira taking the lead in the 17th minute.

Adrián Butzke got behind Léo Bolgado and latched onto Luíz Carlos’ pass, showing strength to hold to off the centre back before finding the bottom corner.

Godwin broke clear and forced a save before Paços got back on top. Djaló’s free kick found Erick Ferigra who tested Batista, Antunes firing over the bar and Kayky next to force a save from Batista after getting past Fernando Varela.

Casa Pia created the final chance of the half which was a replica of their first, Lucas Soares finding an unmarked Martins who couldn’t connect cleanly.

Felipe Martins made a change to his midfield at the break with Ângelo Neto replacing Yan Eticki.

Djaló won two free kicks on the edge of the box, firing the first into the side netting before Antunes drilled the second one low which forced a save from Batista.

Paços de Ferreira's supporters were growing in confidence which was brutally crushed inside the space of two minutes.

Kayky lost the ball to Leonardo Lelo in the 58th minute, Taira breaking free and finding Samuel Godwin who beat Vekic from a tight angle. Rui Pires was next to lose possesion, Godwin releasing Lelo who cut the ball back to Neto who found the bottom corner.

The home crowd were getting further irritated with their side continuing to give the ball away.

Two Casa Pia substutions combined to extend the lead in the 74th minute. Baró strolled through some non-existent defence and laid the ball off to Clayton, the Brazilian striker side footing the ball past Vekic.

Paços de Ferreira tried hard to find a way back with Butzke and Delgado going close. Mauro Couto came off the bench to head Antunes’ cross into the net, but it was too late for the home side who had to face the music from their supporters after the final whistle. 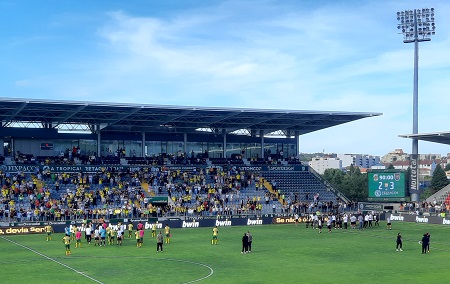 I wrote about Casa Pia and Filipe Martins after their 1-0 defeat to Benfica a month ago. Since then the promoted club have picked up 10 points from four games, beating Boavista 1-0, winning 1-0 in Guimarães and earning a 0-0 against Arouca.

Martins gave three players their first starts of the season, Fernando Varela and Léo Bolgado lining up next to Vasco Fernandes in central defence and Yan Eteki preferred to Ângelo in midfield.

They capitalised on errors to overturn the 1-0 half-time deficit in Paços de Ferreira with all five substitutes playing their part in picking up another three points.

Paços de Ferreira slumped to a sixth straight defeat, four of those without scoring a goal. Needless to say, it’s been a terrible start for the beavers.

There were signs that Peixoto was turning it around, his side scoring twice in the 3-2 defeat against Benfica and suffering a narrow 1-0 defeat against Boavista last week.

Peixoto’s tactical and personnel changes were working well against Casa Pia until it all fell apart in the space of two minutes. He was defiant in the build up to the match, saying “It takes a lot more to bring me down and with a win everything changes.”

The obvious problem is that his side can’t even earn a draw, let alone win. Peixoto and his players faced the fury in front of both stands after the final whistle, graciously accepting the rage from the home supporters.

One always feels for managers who are sacked after their players continually make individual mistakes, but we have already seen Marítimo pull the trigger and fire Vasco Seabra, Peixoto’s job security in Paços de Ferreira surely at an all time low.

By Matthew Marshall at Estádio da Capital do Móvel