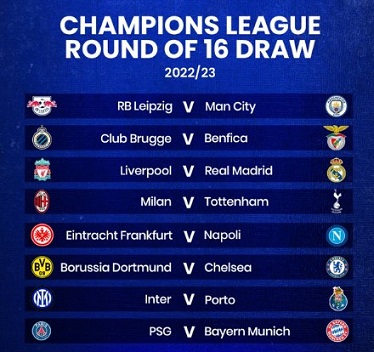 The draws for the next phases of UEFA’s club competitions took place today, and Portugal’s four remaining representatives will be mainly pleased with the outcome.

In the Champions League Benfica will play Club Brugge, while FC Porto take on Inter Milan for a place in the quarter-finals.

In the Europa League Sporting were paired with Danish outfit Midtjylland, while Braga will play Italian club Fiorentina in the Conference League.

Having topped their respective groups, Benfica and FC Porto went into the draw as seeded teams and therefore with a higher chance of getting a more favourable opponent in the round of sixteen than the group runners-up, although Liverpool and PSG (for Porto) were possible adversaries.

Both Portuguese clubs will be relatively happy with the outcome. Benfica take on Club Brugge. The Belgian outfit were one of the surprise teams in this year’s competition, beating Porto 4-0 at the Dragão early in their campaign. However, they appeared to fade somewhat, with the Dragons exacting revenge by winning 4-0 in Belgium in the return match, and Brugge dropped to second place in the group on the last matchday after a goalless draw at Bayer Leverkusen.

Benfica reached the quarter-finals of the competition last season and will be confident of repeating the achievement this year after a brilliant Group H campaign in which Roger Schmidt’s side outgunned PSG and Juventus to top the section.

FC Porto have been given a sterner task, theoretically at least, as they face Inter Milan. The Italians are not having the best of seasons domestically. They are currently in seventh place in Serie A. However, in the Champions League it is a different story, Simone Inzaghi’s team coming through an extremely tough group with ten points, winning and drawing against Barcelona to knock the Catalans out of the competition.

Porto have done well against Italian teams since Sérgio Conceição has been at the helm, with the 47-year-old coach drawing on his profound knowledge of Italian football having spent the best years of his playing career there – including a two-season spell at Inter.

The Dragons started their Group B campaign poorly before reeling off 4 successive wins to top the group in style, and they will certainly not be overawed by the Nerazzurri.

Elsewhere, the draw threw up two blockbuster ties in Liverpool v Real Madrid (a repeat of last year’s final) and PSG v Bayern Munich (a repeat of the 2020 final in Lisbon).

Full Champions League round of 16 draw

Sporting have been maddeningly inconsistent this season, winning and drawing against Tottenham Hotspur in the Champions League, but losing to the likes of Chaves, Arouca and Varzim domestically.

Rúben Amorim will be hoping that during the extended break for the World Cup, he can iron out the team’s problems. Should the Lions resume 2022/23 strongly, they will be confident of making it to the next round of the Europa League having been drawn against FC Midtjylland in the playoff.

Curiously, the Danish team have already played opposition from Lisbon this season, having lost 4-1 (away) and 3-1 (home) against Benfica in Champions League qualifying. With Midtjylland currently languishing in 8th place in the Danish Super league, Sporting will fancy their chances of making progress.

Braga’s 10 points in the Europa League group phase was insufficient to avoid elimination from the competition, with the Guerreiros dropping into the Conference League.

Artur Jorge’s team landed Fiorentina in today’s playoff draw, one of the tougher opponents they could have faced, at least in theory.

Nevertheless, the Italians are not enjoying the strongest of seasons. They are currently sitting in 12th place in Serie A. The two teams have never met previously and a close-fought tie appears in the offing.

Benfica, Sporting - next round; Porto, Braga - out

Porto have a chance against Inter, IMHO

Favourable draws for the most part. Braga was the only unlucky one.

Happy to have drawn Brugges, a nice reward for that late group-winner. And very happy for both of our teams to avoid Liverpool. I think the Porto x Inter tie will be a great...

Favourable draws for the most part. Braga was the only unlucky one.

Happy to have drawn Brugges, a nice reward for that late group-winner. And very happy for both of our teams to avoid Liverpool. I think the Porto x Inter tie will be a great one, and given Inter’s form as of late, I’m betting on Porto to progress to the QF, as well as Benfica. However, the World Cup complicates this a bit more, so we’ll see.

Inter have had a lacklustre season, they are not as defensively sound as they once were, Martinez and Dzeko’s partnership hasn’t quite paid off just yet, Lukaku injury prone, and their midfield is in limbo a little bit as well. They beat and tied Barca yes, but both games could have also been Barca wins, they were unlucky not to win at least one of them. But yes, they have done well in the CL thus far. Again, it’s hard to speculate on momentum and the season so far because of the brilliant timing of the World Cup, but my money is on Porto. They look a completely different side as they did a couple of months ago. Conceiçao is a great coach, he’s placed faith in Eustaquio and has got the midfield ticking again, has allowed Cardoso and Carmo to shine in the absence of some of the senior players, Galeno becoming a regular, explosive starter in this side, and Taremi continues to be clinical. Not mention the form that Diogo Costa’s been in lately, JEEZ!

To me, it’s a fascinating tie between two pretty evenly matched teams. On paper Inter takes Porto, but I believe if Porto show up to play as they have in their last 4 CL games, have the capacity to win this tie semi-comfortably.

Read More
Teresa
There are no comments posted here yet