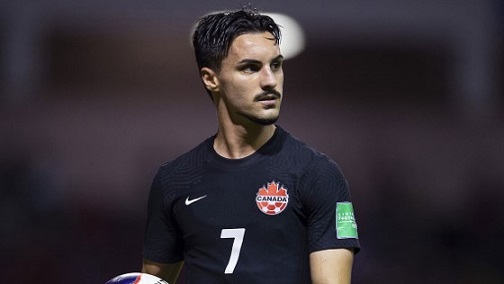 We continue our series of World Cup articles on Primeira Liga stars by focusing on Stephen Eustáquio, the talented FC Porto midfielder with roots in both Canada and Portugal, who rose through the leagues to deservedly earn his opportunity at the 2022 tournament in Qatar.

This is a journey worthy of extra recognition, having almost ended before it even began following a serious injury, although that only seemed to propel Eustáquio to greater heights. Now the Canadian international will debut at his first World Cup, when they take on Belgium in Group F tomorrow, hoping to make a strong statement of their intentions after a strong qualification campaign.

Canada has long maintained a somewhat relaxed immigration policy. According to the 2016 census, almost 22% of the Canadian population was born abroad. That number is constantly growing, with Europe and Asia providing the largest portion of incoming migrants. Many believe this is why football has continued to grow in popularity, quickly overtaking many of the traditional North American sports, both in terms of participation and following.

One of the largest individual migrant communities is Indian, who have also contributed towards the growth of cricket in Canada, but the ‘Beautiful Game’ has become just as popular in recent years. For many, wagering on games is one way to enjoy direct interaction, looking to find the best football betting sites in India, backed by reliable reviews where competitive odds and offers are highlighted.

While it may be one of the smaller diasporas in terms of population, there is also a thriving Portuguese community in Canada, numbering just under 500,000 in the 2016 census. This included the parents of Stephen Eustáquio, who moved to Canada to embark upon a new life before his 1996 birth in Leamington, Ontario.

Childhood enjoyment of playing football was initially cultivated by the local youth team in Leamington, although by the age of seven, the family of Eustáquio returned to Portugal where his development would continue.

Stepping stones towards the football elite

The early trajectory of Eustáquio passed under the radar of bigger Portuguese clubs, starting out with amateur side Nazarenos, before switching to third division side Torreense, where he would spend two seasons as a first-team regular. Solid performances eventually caught the eye of Leixões in the Segunda Liga, where Eustáquio would make his professional debut.

Following just one excellent season at Leixões, Primera Liga side Chaves paid his €500,000 release clause. However, during the 2017-18 and 2018-19 campaigns, he struggled to cement a regular place in the first eleven, which led to an ill-fated switch to Mexican side Cruz Azul at the age of 22. During his very first appearance as a substitute, Eustáquio was red-carded and reinstated thanks to VAR, then stretchered off with a serious injury.

🇨🇦 | Stephen Eustáquio with a superb finish for FC Porto and it continues his fine form in the attacking third.

After eight months out of action, Eustáquio returned to Portugal on loan with Paços de Ferreira, quickly establishing himself and impressing for the remainder of the 2019-20 season. Progress would continue during the next two seasons, as his qualities as a solid and reliable defensive midfielder continued to grow, earning quite the reputation for his marking and ability to close down rivals, along with a fearless approach to tackling and winning the ball.

This eventually caught the attention of scouts at Porto, who swooped to sign Eustáquio on loan in January 2022, reserving an option to make the deal permanent. His debut came on 6 February 2022 and although he was in and out of the championship-winning side, Porto exercised their option to retain Eustáquio in May 2022.

This season, however, Eustáquio has taken his game to the next level, making the most of the opportunities afforded by the departures of fellow midfielders Vitinha and Fábio Vieira in the summer, transferred to PSG and Arsenal respectively.

In the 2022-23 campaign to date he has become one of the most consistent players at Porto statistically, contributing 5 goals and 4 assists in all competitions, and has been increasingly making himself a central piece in Sérgio Conceição’s game plan every week.

Eustáquio found the net in four of the five games prior to the club season interruption for the World Cup, including goals in back-to-back Champions League matches.

Pathway to the World Cup

Although eligible to represent Canada through birth and Portugal via his parentage, it was the Canadians who made the first move to call up Eustáquio for international selection, representing their under-17 side at the 2012 AGS Cup in Spain. However, by November 2017 it was Portugal who came calling, when under-21 boss Rui Jorge selected Eustáquio for the 2019 UEFA European Championship qualifiers. He went on to make 7 appearances for the U21 side.

Interestingly, while injured and enduring the low point of his career at Cruz Azul in Mexico, this was just the moment when Canada made contact. After discussions continued, Eustáquio made the decision to represent Canada in February 2019, then once fully recovered from his injury, debuted on 15th November in a CONCACAF Nations League fixture against the United States.

"Even if we didn't qualify, I made the best decision of my life to come play for Canada."

Eustáquio has gone on to become a key ingredient in the recent progress of the Canadian team, part of the 2021 CONCACAF Gold Cup side which reached the semi-finals of the tournament. He was also pivotal in midfield throughout an excellent FIFA World Cup qualification campaign as Canada topped the standings ahead of Mexico and the United States.

Having earned 26 caps and scored 3 goals, Canada head coach John Herdman showed little hesitation selecting Eustáquio, who will now debut in the biggest international tournament of them all. What’s more, his reliability and consistency will be crucial, as Canada seek to upset the odds and become one of the surprise packages, during the 2022 FIFA World Cup in Qatar.

Eustáquio and Steven Victoria are a great reflection of the Portuguese Canadian community, half million Luso canucks had a strong hand in making Canada what it is today.... Eustáquio's story is incredible his trajectory upwards is fascinating.As...

Eustáquio and Steven Victoria are a great reflection of the Portuguese Canadian community, half million Luso canucks had a strong hand in making Canada what it is today.... Eustáquio's story is incredible his trajectory upwards is fascinating.As a Benfiquista myself watching him play with F.C Porto every week is getting to much , i have watched one to many Porto matches this year lol

Read More
Danny
There are no comments posted here yet