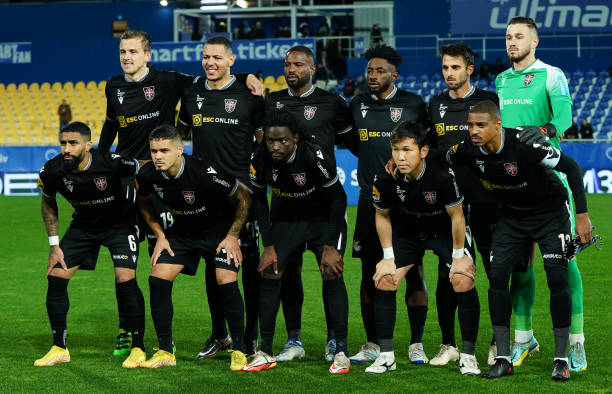 For those that hail from humble little towns and under-represented regions of the country, living in a footballing world heavily-dominated by the ‘Big Three’ - FC Porto, Sporting and Benfica - there can be no greater draw than competing directly against the likes of the Portuguese giants, among others.

With each passing season, that privilege is handed to two-to-three promoted sides, keen to leave an impression at the top of the national footballing pyramid, but the glamour of the top-flight can often be curtailed by the struggles to adapt to new, lofty surroundings.

Casa Pia, GD Chaves and ex-Primeira Liga old-timers Rio Ave became the latest to test their mettle after success in the second division, last season. Contrary to expectations, however, the three Segunda Divisão graduates have undergone a seamless transition into the Primeira Liga thus far, with each side well-placed for a top-half finish.

As the shocks continue, here’s how all three sides have fared so far:

Casa Pia has its own unique tie with Portuguese football as a club born from an institution rather than a geographical location, and are back in the Primeira Liga this season having spent 83 year out of the top flight.

The intrigue was as strong as the doubts surrounding the Casapianos coming into the Primeira Liga, but Filipe Martins’ team, the runners-up in last season’s edition of the officially-named Liga Portugal 2, have stunned all by sitting as high as 5th, trailing the usual suspects - Benfica, Porto, Sporting de Braga and Sporting.

Despite losing star man Jota Silva to Vitória, Casa Pia’s ex-player was among their earliest of victims in a 1-0 victory back in August before defeating Braga, also by a goal to nil on the road. The onus of creating danger falls on Saviour Godwin’s shoulders these days, but the MVP status may well reside with Leonardo Lelo instead, excelling at left-wing back with a goal and three assists and now attracting the interest of some top domestic clubs

Lelo’s a perfect fit for the fluid 3-4-3 that's also helped Casa Pia onto a shock goalless draw at home to the current title holders Porto, accentuating just how tough the newly-promoted side are to beat.

The Lisbon outfit’s latest challenge came against 14th-placed Estoril - a club that many probably predicted to be where Casa Pia are now (and vice versa) - in a local affair, knowing a victory would take them above Sporting by a point.

Unfortunately for the side poised for a 'Best of the Rest' finish, a third red card in as many games meant the Lisbon outfit wouldn’t be able to capitalise on the Lions’ derby-day draw against Benfica as Estoril imposed their numerical superiority over Casa Pia with a 2-0 home victory.

We’re no stranger to Chaves over the years but, unfortunately for them, neither is the second division, as they battled against allegations of being a bit of a yo-yo club.

The aim for the Flavienses was clear - avoid the drop at all costs - but as the season’s unravelled itself, it’s steadily become clear that Chaves are capable of a whole lot more. In fact, after 16 games, Chaves are just a win away from matching their best ever points total at the halfway stage of the season, with the 21 attained placing them 9th in the league table.

If you thought Casa Pia had been impressive, Chaves, alongside Vizela, are the only club not named Benfica or Sporting to have beaten Martins’ men, all whilst juggling some injuries to key positions.

At the back, Steven Vitória has been imperious as ever, chipping in with four goals that's bettered only by Héctor Hérnandez’s five, but perhaps the most crucial to Vítor Campelos’ side has been the guile of ex-Benfica youngster João Teixeira, himself claiming five goal involvements.

It hasn’t all been good news for Chaves, however, with the northern outfit registering just one win in front of their home crowd so far, this season. Arouca’s visit last Sunday offered the Trasmontanos the chance to put that right against a positional rival, but despite taking the lead via Vitória’s spot-kick, the visitors repelled the defender’s goal with a penalty of their own, converted by centre back João Basso.

Two difficult away games against Boavista and Vítoria follow for Chaves, which we’re not quite sure at this moment in time whether it’s good or bad news for the 9th placed outfit that’s apparently so much more comfortable on the road, but what’s certain is the satisfaction that can be taken from their current strong half of a season.

To many, Rio Ave were a club that had no business dipping into the second tier of Portuguese football after a 19-year-stay in the Primeira Liga, but the bounce-back was as prompt as you’d expect, returning as second division champions, much like in 2003.

As a result, holding many household names to the average Primeira Liga fan, with an exciting manager to match in Luis Freire, Rio Ave were odds-on favourites to do the best out of those promoted.

The prediction many held hasn’t quite gone to plan after a rocky start to the campaign, but Rio Ave have been able to pierce through their poor results with key wins against the likes of Porto, high-flying Arouca and Boavista, stabilising themselves just behind Chaves in 10th.

Freire’s side has caught the eye with how brave and expansive they can be on the ball, sometimes to their own detriment, joining a plethora of sides opting for three centre backs to construct play.

The fortunes usually rest on how quickly the Rio Ave backline can feed the ball into the cultured Guga in the middle, but you’d do well to look past the pacey Aziz Yakubu, responsible for over half of the promoted sides’ goals with six strikes in the league and a further three assists.

Holding onto the Ghanaian striker, or replacing the forward effecively could prove to be key after a proposed switch to Al-Ahly broke down, meanwhile Rio Ave fail to find the back of the net in his absence. The latest showing of his importance came at home against bottom-of-the-table Paços de Ferreira, with Aziz parked on the bench.

As Paços took a first-half lead through Nigel Thomas, Aziz was called on to rescue the encounter following the interval. He’d eventually fail, offering an insight into what life could be like without the coveted striker.

But despite a defeat that can only be described as a disappointment to the Vilacondenses, it has, in more general terms, been a successful return to the Primeira Liga for Rio Ave. As Freire and co. can attest, it’s one that does have the potential to deteriorate with the rumours swirling around Aziz’s future, but the sense that Rio Ave can find another gear, even without the goal-hungry striker, doesn't go away. Watch this space!