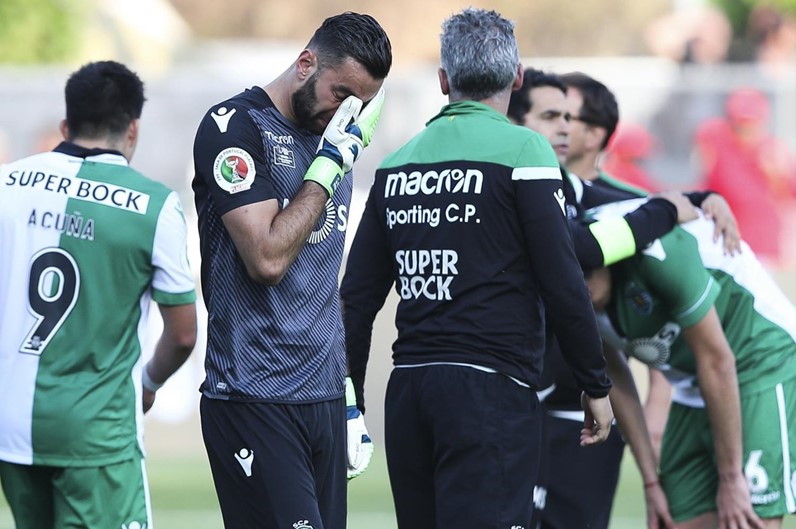 There can be few fans across the world as eager to see their club succeed as Sporting’s, who will have to endure another year, their 17th in a row, without an elusive league title.

The Lions have fallen on hard times since the glory days of Mário Jardel and co. in 2002, more specifically at the start of the current decade, with the club facing financial ruin throughout their rivals’ shared periods of dominance.

Club president Bruno de Carvalho, back in 2013, was the man elected to steer a successful road to recovery and with his abrasive style came a real sense of presence for the Sporting faithful, deemed necessary in light of the political facets the Portuguese game tends to uncover away from the pitch.

No longer succumbing to life in the shadows of Benfica and FC Porto, few are the ways in which the Green and Whites could have made a bigger statement of their new-found ambition and appetite for success than with the appointment of three-time Primeira Liga winner Jorge Jesus in the summer of 2015, fresh from success at the Estádio da Luz.

But despite the Lions’ best efforts, Benfica held onto the title for a third consecutive year, boasting a two-point advantage over Jesus’ men, but the outcome wasn’t about to perturb the manager’s impact on the club. The football was highly refined, attracting the masses back to Alvalade every other week, while a record 86-point total saw Sporting set several other club records, such as number of victories (27), away wins (14) and goals scored (111). It was a great effort from all involved, with the sense being that the club were, finally, nearly where it aspired to be.

Sporting weren’t able to follow up the next season in the same vain, however, as misfiring transfer deals, excluding the capture of Bas Dost from Wolfsburg for €10.5 million, saw the title hopefuls regress to a third-placed finish behind Porto and Benfica, who’d claim the title once more.

The club and fans alike reacted well to the disappointment, not allowing the thirst for success cloud their judgement just yet, and a wave of fresh support greeted the 2017/18 season. Optimism continued to brew healthily, as Sporting rectified their transfer strategy with top additions, such as Bruno Fernandes, Jeremy Mathieu and Marcos Acuña - a stark contrast to the investment, or lack thereof, being made by their title rivals. It could well have been the perfect storm the Lions had been waiting for.

Far from a walk in the park, however, what we had was a race until the end between three competitive teams, one which Sporting, once more, wouldn’t go on to conquer in a third-placed finish. There can be little shame in that. It is, by design, how we all envisage a title race to go between like-minded sides, with top-spot only big enough to pin one side up as champions. It’s simply the nature of the sport, to some, meanwhile others are far less accepting of that reality.

One of those in no mood to tolerate failure appears to be the Sporting president, but history may now look back at the great stabiliser as the true author of the Lions’ subsequent demise, following a bizarre chain of actions.

A shift in tone came with the untimely General Assembly meetings, earlier this year, with Bruno de Carvalho fuelling talk over a potential resignation in light of posts declaring he was “tired” and felt “alone”. The much-maligned Sporting leader followed that episode up with regular disputes with users in comment sections of his personal Facebook page, between floating in and out of deactivation, before whatever has been irking him over the past few months led him to drop a bombshell on the Alvalade outfit.

Despite stating the obvious, Bruno de Carvalho dedicated his time to publicly outline his players’ mistakes, again via Facebook, in reaction to Sporting’s 2-0 loss away to Atlético Madrid in the Europa League, back in April. Without a great amount of thought for the situation, the players, in solidarity, all took to their own platforms of social media to show their discontent over the president’s words, to which he retaliated by calling them “spoilt children”. Damaging rumours flew and in turn, a war was created, all in front of our very own eyes.

A moment that should never have even been pondered, not least because criticism can be particularly damaging to some characters in private, let alone when it’s aired in public. Each and every player culpable for the loss at the Wanda Metropolitano would’ve been well aware of their own mistakes, requiring nothing more than support to move on from what had happened.

Sporting were still firmly in the tie against Atlético, after all, with the return leg being played at home. Back in Portugal, the Lions still held an outside chance of going for the league title, meanwhile a blockbuster semi-final tie versus Porto in the Taça de Portugal also waited in the wings. The stakes were high and the consequences were huge.

It was a delicate moment in any team’s season which required the right dosage of concentration, application and, most importantly, unity. The Lions lost all of that.

On the pitch, as admirable as Sporting’s reaction may have been when going on a six-game unbeaten run, pushed on by the fans’ show of love for their players, the rift between the squad and the president offered doubt in the minds of many, equally dedicated to Bruno de Carvalho’s ways as they are to their heroes out on the pitch in green and white.

The moment the team exited their good form, questions were always bound to be asked of the players, subsequently resulting in insults that no Sporting player deserves to hear. Sharp words that will have undoubtedly been bouncing within Rui Patrício’s mind just yesterday, as he sobbed uncontrollably in what may have been the least fitting end to his iconic Sporting career, losing 2-1 to Desportivo das Aves in the cup final, yesterday.

The same sentiments most certainly can’t be excused for the mob of 50-odd people who invaded the club’s training ground just last week to attack players, nor can those actions be attributed en masse to Bruno de Carvalho’s positioning, given the lamentable coverage and lack of veracity brought forwards by the Portuguese media, but it does add yet another horrible facet to a very dark moment in the club’s history.

A rich history that could be tainted in the coming days, as we await to find out the full extent of the damage done within the Sporting camp, with regards to potential moves away from the club in the summer.

These are testing times for the Lions and it can be very easy to feel betrayed, as a fan, in this kind of situation. Betrayed by the players’ input, managerial methods, right through to the president’s pledge to hold the club’s best interests at heart.

More ironically, and sadly so, betrayed by ambition and our own definitions of it. It was ambition that roared Sporting on since Bruno de Carvalho’s arrival in 2013, yet it could be the same tool that, as of April 5th 2018, goes onto unravel much of what’s been built throughout the last five years, despite being so agonisingly close to where the club aspires to be.

Patrick, well written and 100% true. It is very hard for me to continue supporting this club. I don't mind the 17 years without the title, I don't mind the stupid losses, and I don't mind we always sell our stars at the end of the season. I care...

Patrick, well written and 100% true. It is very hard for me to continue supporting this club. I don't mind the 17 years without the title, I don't mind the stupid losses, and I don't mind we always sell our stars at the end of the season. I care more about the team playing fun football, taking on Europe's elite with dignity, and seeing the youth Sporting develop. Winning the league would obviously be awesome but it's not the end all be all. However, when you have BdC calling out the players and making this club a laughing stock and a bunch of brain-dead fans attacking our players; I just can't handle the self destruction. I was happy Aves won the game on Sunday and I do not blame the players. I will continue to support the club once BdC gets the F out of here. Until then, they will not receive a penny of support from me.