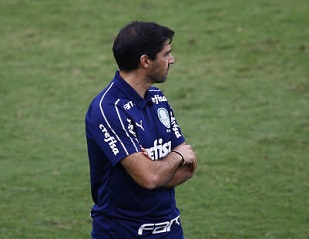 Abel Ferreira has enjoyed a winning start to life in Brazil with Palmeiras, with the Portuguese holding a 100% record after victories in his first four matches in charge.

However, the former Braga boss has urged his players to remain focused on their job and consider the fickle nature of football good reason to keep celebrations to a minimum after beating Fluminense on Sunday afternoon.

Palmeiras ran out 2-0 winners at Allianz Parque, giving Abel his second consecutive league win to add to a couple of victories in the Copa do Brasil. So far, since Abel's arrival from Greek club PAOK, his side have yet to concede a goal across their four matches and their latest triumph sees Verdão move up to 5th in what looks set to be a highly competitive Campeonato Brasileiro Série A.

“The only thing I can say is that we will not always win,” Abel said after the win against Fluminense. “We will do everything to keep winning. For us, all competitions are important; I don’t know if we will win all of them or none of them. What I do know is that the players are committed to our work.

“I know that some like to read social media and all the comments. The ones who praise us now will be the same ones who will criticise us later. I usually say that I have a 24-hour rule. Whether we win or lose, we have 24 hours to celebrate or cry. We have to remain strong and solid in our work.”

One of Palmeiras’ wins under Abel came against Vasco da Gama, coached by fellow Portuguese Ricardo Sá Pinto, and inevitably the press have taken time to compare the records of both managers in the light of Jorge Jesus’ tremendous success with Flamengo last year. Jesualdo Ferreira, who briefly assumed control of Santos earlier in the season, was also considered in the comparisons.

Brazilian press have been comparing how the Portuguese coaches fared in their first four games:

Sá Pinto and Vasco also enjoyed a productive weekend with a first away win in seven matches, beating Sport Recife 2-0 on Sunday.