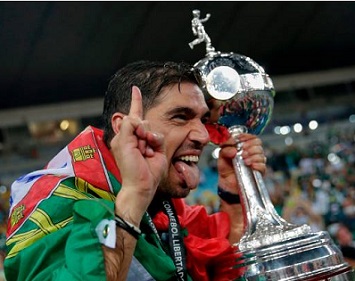 Abel Ferreira won the first trophy of his senior managerial career on Saturday evening as his Palmeiras side conquered South America with victory over rivals Santos in the Copa Libertadores final.

At the historic Maracanã Stadium in Rio de Janeiro, a dramatic goal nine minutes into added time by Breno gave Palmeiras their second-ever triumph in the competition, and ensured a Portuguese coach won the Copa Libertadores for the second consecutive season.

Despite ongoing covid-19 regulations, some 5,000 people were allowed to attend the final between the local rivals at the Maracanã, including a reduced amount of supporters from both clubs. Palmeiras and Santos, rivals from São Paulo, contest what is known as the Clássico da Saudade (derby of nostalgia) and their meeting was the third time the final has been an all-Brazilian encounter.

The showpiece occasion struggled to deliver in terms of excitement as the match appeared to be headed towards extra time, but Breno’s 99th-minute header gave Verdão the title of South American champions for the second time and the first since their 1999 victory under former Portugal boss Luiz Felipe Scolari.

“I want to thank the players in a special and loving way, there are no good coaches without good players, without good men,” Abel said at his post-match press conference.

“There are things that are worth more than titles. My greatest joy was not raising the cup, it was seeing my players happy, the staff happy. I can’t help but say a word to Santos, a great team, a great coach, but the team with more belief won.”

With Palmeiras’ glory swiftly reaching Portuguese shores, Abel was duly congratulated by his former club Sporting on social media, while Braga president António Salvador was quick to pay tribute to their ex-manager. “Humble, ambitious, demanding, methodical, studious and always looking to evolve. I knew that, sooner or later, he would end up reaching the top,” Salvador said. “Abel Ferreira is another success story of coaches who came through Braga and reached levels of international excellence. This was the case with Leonardo Jardim, Jorge Jesus and Paulo Fonseca, plus others.”

José Pereira, president of the National Football Coaches Association in Portugal (ANFT) also issued a statement. “I think it is an unequivocal demonstration of the competence and quality of Portuguese coaches,” Pereira said. “For the second consecutive year, Portuguese coaches have won this title in the country of football. It is not by chance, it is because our coaches are very well prepared. And I think it is a prize, not only for our coaches, but for Portuguese football.”

Veteran coach Scolari, who managed Palmeiras to Copa Libertadores success in 1999 before going on to win the World Cup with Brazil and enjoy a 5-year spell with Portugal, offered his congratulations. “I am happy that Palmeiras won the Libertadores again and with someone I know. I had the opportunity to meet Abel when I was with the Portugal team and he is doing a spectacular job here in Brazil. It’s great that Palmeiras is champion again with a person like Abel. Last year, it was Jesus and this year Abel with the team I managed. I am very happy for him and I hope he continues this wonderful job at Palmeiras.” 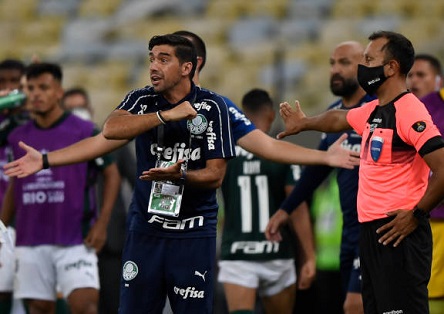 Belief in youth as Verdão climb the mountain

Abel’s achievement, which follows on from Jorge Jesus winning the Libertadores and Brazilian league double with Flamengo in 2019, has come in hugely testing circumstances. Palmeiras appointed Abel in October, having dispensed with veteran coach Vanderlei Luxembourgo and failed in attempts to entice Spaniard Miguel Ángel Ramírez from Independiente del Valle of Ecuador.

With fixtures coming thick and fast, the former Braga and Sporting coach adapted seamlessly to his new surroundings. Although the style of football has arguably not been as enchanting as that of Jesus’ Flamengo, perhaps partly due to the excessive demands placed on the team during the pandemic, Abel has been credited with strengthening the connection between fans and players as well as developing many of the club’s talented assets.

Creative players Raphael Veiga and Rony, both 25, are widely regarded as having improved under Abel’s guidance, while 19-year-old midfielder Danilo, who started the final, is one of a number of youngsters blossoming since being given their chance in recent months.

“I can’t sell an idea if I don't believe in it,” Abel says. “And in a very simple, very humble way, they were grasping that idea. It’s true, it wasn’t a brilliant final for several reasons. First, the heat; second, it was a game in which we knew that the team that scored the first goal would have an advantage. But we won the title and it was thanks to the work of many people.

“I have to thank Brazil, to thank Palmeiras and the Palmeiras family in a very special way. My 24-hour rule on celebrations? I will allow them to break it, but there is still a lot to do this year. We have climbed the mountain, we are savouring the landscape. It’s good to feel this emotion, but [we must] realise that soon we have to win more. We cannot let the fantastic landscape up there distract us.

“I can tell you and, [I want to] thank you here publicly, that the President of Portugal [Marcelo Rebelo de Sousa] called me. It is a tremendous pride for me to receive a message and a call from him. [I want to] thank him on my behalf and that of my technical team, who are Portuguese.” 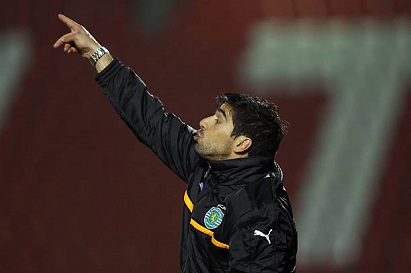 It started at Sporting

The trophy is Abel’s first in senior coaching, having last enjoyed silverware as coach of Sporting’s youth team when winning the Campeonato Nacional de Juniores in May 2012. On that day, a brace from Bruma saw Abel’s team to a 3-1 win over Vitória de Guimarães to confirm them as champions, and the experience at Alvalade was mentioned during his post-match words.

“The first thing I remembered was my family and then after that I remembered the first title I won for Sporting’s juniors. That’s where it all started. So I thank all the players I coached, especially the juniors from Sporting. [I thank] the team B from Sporting, the B team from Braga and the first team at Braga, where we did extraordinary work, and the president from Braga, who gave me the opportunity after I had done nothing in the first division. I also thank the owner of PAOK, who invested a lot to bring me there without any title and who let me go because I asked him to let me come here.”

Abel, joined by his Portuguese coaching staff including Carlos Martinho, Tiago Costa, Vítor Castanheira and João Martins, cut an emotional figure during celebrations. An especially poignant exchange with goalkeeper Weverton was picked up by television cameras, and Abel admitted there were wider aspects which influenced his demeanour.

“In football, nobody wins alone,” he said. “It is true that today I am much better coach, but I am a worse father, worse uncle, worse son, worse brother because I left my family there [in Portugal]. You don’t know how many times I cried alone. I miss them when I lay down on the pillow at night.

“I left the field after the final so no one would see me crying because it is very difficult. I am a family person, I love my daughters and my wife. I crossed the Atlantic to believe in something before it happened, against all predictions. I went to a club that was sure it could provide me with the title. But I am a worse father, worse brother, worse uncle. This is something we have to sacrifice for our profession.”