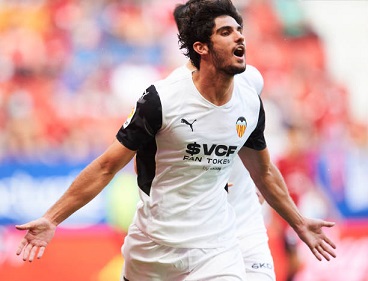 On a weekend of high output for Portuguese goalscorers across Europe, some of Portugal’s best-known exports hit the back of the net in the continent’s top leagues. With much of the headlines taken by Cristiano Ronaldo, Bruno Fernandes and Bernardo Silva in England, there were also major stories in Italy, Spain, Germany and beyond as Luso players struck in 13 different countries!

Gonçalo Guedes is enjoying a promising spell with Valencia, and his goal in victory at Osasuna briefly took Los Ches top of the table in Spain. Meanwhile, a seven-goal thriller in the Bundesliga saw Borussia Dortmund overcome Bayer Leverkusen with the help of a vintage Raphaël Guerreiro free-kick, while Rafael Leão has goals in consecutive games for AC Milan after opening the scoring in their win over Lazio.

Valencia’s form at the start of the new Spanish season has surprised many, and former Benfica man Gonçalo Guedes has been central to the team’s results. Guedes went into the recent international break, where he notably provided the assist for Ronaldo’s equaliser against Ireland, having been named Man of the Match for a goalscoring role in Valencia’s 3-0 win over Alaves.

The winger was equally as effective on Sunday against Osasuna, proving a devastating five-minute spell in the second half which began with Guedes forcing an own goal from Aridane to put Valencia 2-1 up. Guedes then made it 3-1 with a brilliant right-footed finish, after which Paraguayan defender Omar Alderete headed in the fourth goal.

We played a great game, we have not started in the best way, but we have been able to turn it around,” Guedes told www.valenciafc.com after the match. “You have to maintain concentration, focus and continue working to get the three points like today.”

Valencia coach José Bordalás said of the Portuguese: “He is a fantastic player with a very high commitment. I tell him every day that he has the quality to make the difference and he is showing it at the start of this season, he knows that he can give us much more, I want to congratulate him and the others, they have helped us a lot with goals and with work.” 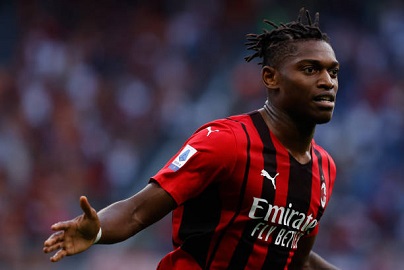 AC Milan’s Rafael Leão also made it two goals in two games, adding to his strike against Cagliari last month with a splendid opener in a 2-0 win over Lazio on Sunday. Leão started and finished the move to give his side the lead, driving forward with the ball before exchanging passes with Ante Rebic and coolly slotting past goalkeeper Pepe Reina.

“I think it was a good goal but above all, there is the great work by the team who are working very well, I’m happy,” Leão told reporters after the match.

Asked what coach Stefano Pioli asks of him and how he believes he can improve, Leão said: “The coach and the team know my quality in dribbling. I try to help my team like this, and I am satisfied with what I have done. What I lacked is consistency. I am trying to find it and to grow game after game and training after training.”

Milan’s win means they along with Napoli remain level on points with Jose Mourinho’s leaders Roma. The Rossoneri travel to Anfield in midweek to play Liverpool in the Champions League.

Raphaël Guerreiro scored a vintage free-kick, arrowed into the top corner from over twenty yards, for Borussia Dortmund in their exhilarating 4-3 win away at Bayer Leverkusen in Germany. Remarkably, Dortmund trailed on three separate occasions before Guerreiro levelled the score at 3-3, after which an Erling Haaland penalty gave the visitors the points.

In France, there was a first goal in Ligue 1 for Bordeaux’s summer recruit Ricardo Mangas in their 3-2 defeat to Lens. The signing from Boavista started the season playing in central defence but was moved to left-back against Lens where he opened his account with a crisp finish, albeit the goal was a mere consolation.

Former Tondela striker Tomané scored his first goal in almost a year having suffered injury problems at Turkish club Samsunspor. The 28-year-old joined Samsunspor last summer from Red Star Belgrade, but ended his debut campaign with just five appearances after missing most of the season with injury. Tomané finally got back on the scoresheet on Sunday with a goal in a 2-0 win over Ankara Keçiörengücü.

In the Netherlands, there was a hat-trick for Amarante-born forward Rui Mendes in Emmen’s 7-1 win over MVV in the Eerste Divisie. Mendes came through the ranks in Germany at Arminia Bielefeld and Hoffenheim before joining Emmen in the summer. Meanwhile, in Poland Lech Poznan lead the standings in the Ekstraklasa and midfielder João Amaral scored as they came from two goals down to retain their unbeaten record with a 2-2 draw at Rakow Czestochowa.

In Denmark, there was a brace for former Portugal youth international Pedro Ferreira to help AaB secure a 3-2 win at Viborg. Asumah Abubakar scored the equalising goal for Lugano as they held Swiss giants Basel in the Super League, while in Turkey, veteran former Portugal man Manuel Fernandes assisted a goal for Miguel Cardoso in Kayserispor’s 2-0 win over Kasimpasa.