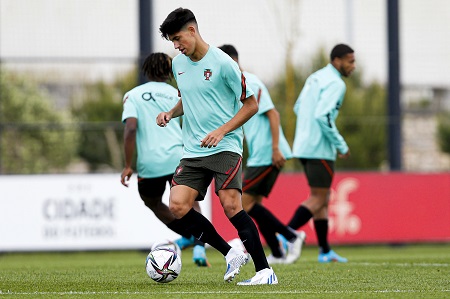 The “Equipa das Quinas” have been drawn in Group D alongside Scotland, Sweden and Denmark. Their campaign begins against the Scots, the match taking place in Lod on Tuesday 17 May.

PortuGOAL’s Matthew Marshall is in Israel to repent for all his sins and see if Portugal can continue their proud history at the tournament. They won four titles when it was an U16 event and two titles at U17 level, in 2003 and 2016.

Portugal won the U16 European Championship for the first time in 1989. Gil Gomes scored 10 goals in the tournament, Luís Figo on target in the final, a 4-1 win against East Germany.

In what could be a positive omen for Portugal, they won their final U16 European Championship in 2000 when the tournament was hosted in Israel. They defeated Czech Republic 2-1 in the final, Ricardo Quaresma scoring both goals including the golden goal in the 91st minute.

The tournament switched from U16 to U17 in 2002, Portugal hosts in 2003 when they lifted the trophy. They got past England on penalties in the semi-finals, beating Spain 2-1 in the final with Márcio Sousa scoring both goals.

Thirteen years passed before Portugal won again, the 2016 edition hosted in Azerbaijan. José Gomes scored six goals in the tournament, Diogo Dalot opening the scoring in the final which ended 1-1 against Spain, Portugal converting all five spot kicks to win the penalty shootout.

Portugal enjoyed home advantage in the qualifying round with all three matches played at the Estádio Algarve. They started in style, beating Kazakhstan 5-0 and Wales 2-0.

They took the lead twice against Ukraine but failed to close it out in a disappointing 3-2 defeat. The six points gained were enough to reach the elite round.

Once again they were afforded home advantage with matches played in Viseu and Tondela. They beat Republic of Ireland 4-1 in the opening game before a late goal secured a 2-1 victory against Bulgaria.

José Lima’s side conceded in the 2nd minute against Finland before turning on the style, securing an emphatic 9-1 victory with José Rodrigues and Rodrigo Ribeiro hitting hat-tricks.

Defensive midfielder Dário Essugo joins the squad after representing the U19 side in the European Championship qualifiers.

Two players from Sporting CP’s U17 side have been selected and could make their first international appearances, midfielder Manuel Mendonça and striker Vivaldo Semedo.

The remainder of the squad featured in the elite round.

José Lima was born in 1966 in Sintra. He came through the youth ranks at Sporting Clube de Portugal where he earned two caps for Portugal, both in 1989.

He spent a season at Vitória de Guimarães before joining Atlético Clube de Portugal where he scored 28 goals in 84 appearances.

In 1997, at the age of 30, the forward joined Alverca and helped the club reach the Primeira Liga for the first time. He rarely featured in the top flight and announced his retirement in 1999.

Lima began his coaching career as an assistant at Alverca, spending one year at Belenenses before a 10-year spell at Sporting CP, assisting Carlos Carvalhal at U19 level and José Couceiro in the senior side.

He started working with Portugal’s youth teams in 2019, firstly as assistant manager at U15 level before taking charge of the U16 squad. He has been the U17 manager since July 2021.

Portugal were dealt a blow last week with Lima testing positive for covid-19. He has beenun able to travel to Israel with his assistant Rui Bento taking charge.

Bento said the team is continuing to follow the plan despite Lima's absence: "We had the misfortune of our coach not being here yet, let's hope everything goes well and he can come for the second game. However, he has always been present, nowadays luckily it is possible thanks to new technologies to be in constant communication.

The players know the situation. We don't like it, but we have to find solutions to ensure the situation affects our work as little as possible".

Diogo Monteiro: “The team is ready, we are all focused on playing a great game. We know it will be a very important game, as it is the first, and we want to start on the front foot. We want to win, even though we know that Scotland have a good team. They are dynamic, can play long balls and could have some physical advantages. We will try to stand out from a technical point of view and are confident for the match.”

João Rego: “If you ask us if we dream of the trophy, we won’t lie. Of course we do. We represent Portugal and that means always wanting to win. But just as we dream of it, I believe that all other teams dream too. Our focus has to be game by game, first Scotland and the group stage. We have to go step by step.”

Ivan Lima: “We are a consistent team in various moments of the game, especially at the offensive level. We have a very united, hardworking and hard-working group and we all have a lot of ambition and desire to make history.”

João Vasconcelos: “Our strong point is clearly unity. When we need to 'hold hands' we clearly hold hands, we leave no one behind and we are constantly rooting for each other’s success. With new colleagues, we have a fantastic way of receiving and welcoming them, so that they feel as integrated as possible.

“We can promise that we will have a team that will fight for every result, from the first to the last minute. We will always put the Portuguese determination on the field. Portugal can go far, we have quality and we are a hardworking group. Our focus is only on that objective and more specifically on the game against Scotland. What we can promise to all Portuguese people is that we will strive and commit a lot to take Portugal as far as possible in the competition.”

Dário Essugo: “Of course it’s bad that we don’t have the head coach with us. But we have the rest of the coaching staff helping us and we’ll try to make that a motivation to make him proud. We’ll always be fighting with him and he’ll be supporting us and helping us from outside.”

Ussumane Djaló: “I’m very proud to be in this group that heads to Israel today. We’re going to a competition where we’ll have the chance to represent Portugal at the highest level and we’re very excited about the competition getting closer. We will try and play the best possible way to be happy in the end.

“I have complete confidence in my colleagues and in the coaching team and I am sure that the work we have been doing is being done well. We have collective quality, individual quality and very experienced squad members for our age. This will help us a lot.”

Afonso Moreira: “The team, in addition to being more and more united, is getting better and better in training, you can see that. We know each other more and more, we have evolved tactically and off the field.”

“I speak for myself, but I think also for the whole team: it is a unique opportunity that we have and we are aware of it. We have an incredible opportunity here and we have to take advantage of it and do the best we know how, which is to play football. For this tournament, of course I have individual and collective goals, but if the collective goals are achieved, I don’t even care if the individual ones are not. I’ll do my best to achieve them and thus also help the team.”

Israel initially competed in the Asian Football Confederation (AFC), quallfying for the 1958 World Cup without playing a game. Turkey withdrew for political reasons, Indonesia’s requests to play on a neutral ground was rejected and Sudan refusing to play due to the Arab League boycott.

FIFA had to act, creating a rule that no team could qualify without playing at least one match. They arranged a two legged play-off against Wales who won 2-0 in both legs.

Israel hosted the 1964 AFC Asian Cup and won the tournament, but the achievement was soured after 11 of the 16 nations withdrew before a ball was kicked.

Israel were expelled from AFC tournaments in 1974 following a motion initiated by Kuwait. They competed in the European qualifiers for the 1982 World Cup before joining Oceania for the next two tournaments.

Israeli clubs started to compete in European club competitions in 1991 and the national football association became full UEFA members in 1994.