Mário Ferreira is a resident of Chaves and fervent fan of the city’s football club. He runs the excellent @DepressaoChaves twitter account.

Mário gives us the lowdown of the matchday experience in Chaves and tips for first-time visitors to the town.

How much do match tickets cost? Can you buy your ticket on game day or should you buy it before? Are the games often sold out?

Last season the ticket prices varied from €5 to €20 depending on the stand and who the opponents were. The sócios (members) always have better deals than non-members, with discounts on tickets and merchandise from the club shop.

Yes, it is possible to buy tickets on match day, at the club ticket office, so long as they are not sold out, but in the second division that didn’t happen much. The same can’t be said now we are in the first division though, and for lots of matches the stadium will be at 100% capacity. It is advisable to buy your ticket some time in advance, but if it’s not possible there’s always a chance of getting it on the day of the match.

Where would you recommend having a drink before/after the game?

There are several places to have a drink before the game. You can buy drinks in the stadium itself, in the various bars in the stands, but the fans usually congregate in a nearby street, where the city market is located. On this street there are several cafés with our fans spread around them to drink a beer or have a coffee. The most frequented bares/cafés just before the game starts are the Stadium Snack-Bar, Café Padaria S.Neutel, Café Dias and Snack Bar “Manuel da Praça”. When we go past this street and see a big crowd of fans wearing Chaves scarves and shirts, we know a match is on.

Derbies. Who are your local rivals? Is it a strong rivalry?

Currently there is no big rivalry with local clubs because of the difference in the divisions between us and the nearest clubs. But in the past the biggest rivals of Grupo Desportivo Chaves would certainly have been Ribeirão 1968 FC. They were always hot-blooded games with no quarter given, but generally they were always great football spectacles. There is also the game that can be considered a derby against Sport Clube de Vila Real as they are clubs from the same district, but as this club is now in the lower divisions we rarely play each other. One game that is always full-on and which will probably continue to be this year is the game against Vitória Sport Clube (Guimarães). There are always lots of goals between these two clubs. I’m looking forward to watching this fixture again in the first division this year.

Often in Portugal when the “3 Grandes” travel to other clubs they have more fans in the stadium than the home team. This does not happen in Chaves. Why?

Yes, it’s true. The influence of fans supporting the 3 Grandes has always been strong when playing away against clubs considered “small teams”. In Chaves it’s different. There has always been a huge love for this club by the Flavienses (Chaves residents), who never let the team down when it comes to supporting them, whoever the opponents. This just goes to show that this region deserves to have a club in the top flight, as wherever Desportivo go, they will have a vast group of fans following them to lend their support. To sum up, against the 3 Grandes, the blue and maroon colours will always be the dominant colours in the stands as the fans are avid and have enormous pride in their club.

Which are the best bars to watch football matches on television in Chaves?

In Chaves, the best place to watch football is obviously the Estádio Municipal Engenheiro Manuel Branco! But there are plenty of bars that are good for watching football, such as Twins Bar, Dom Quixote, Café Curto, Caffé Caffé and After Bar.

What should visitors do/avoid on a visit to Chaves?

If you have some spare time beyond watching the game when you come to Chaves, I recommend visiting our Roman Baths, visiting the Largo das Caldas, where you can drink our spring waters. You can also go for a stroll along our beautiful River Tâmega to relax.

If you are more interested in the historical side of the city, you can visit our Castle and its walls, with its beautiful gardens and our Roman Bridge. There are also some museums that depict the Roman times of our city.

As for what to avoid, in relation to football if you are coming as an away fan you should try to get the stadium early to avoid any conflicts or confusions, to make sure there are no skirmishes between the fans of the two clubs. This is not football at all, in my opinion. You should get into the visitors stand to avoid this possibility. Then come full of joy and prepared to enjoy a great game of football!

Do you have any recommendation for a good restaurant?

There are lots of high-quality restaurants in Chaves. The ones I would most recommend are: Marisqueira O Príncipe, Toca da Raposa, Taberna Benito, Restaurante Carvalho, Mister Prego, Porfia dos Leitões, Pensão Flávia and Quinta da Cera.

At any of these suggestions I believe you will have a good quality meal at a good price.

Any suggestion about where to stay?

All of these options are located right in Chaves city centre, which makes it easy to get around for visitors to the city.

Any other tip to help a football fan travelling to Chaves?

R: The only tip I can give is that you come in the certainty you can look forward to a good spectacle of football when you are here and you will be well-received in our city.

I realise, because of the distance between Chaves and other cities in Portugal, it may be a bit of a trek but I believe at the end of this long journey you will be well rewarded. Come with energy and in readiness to watch a great game of football!

To help you plan your trip, check out the football map below. Click on the district you plan to visit for ideas and information on the location and surrounding region. 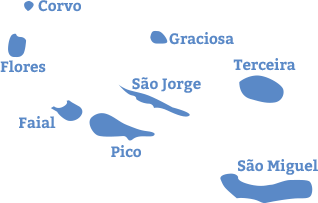