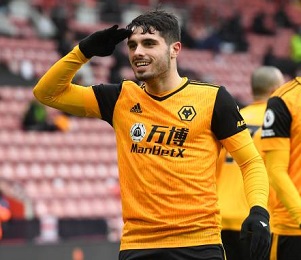 Another highly productive week for Portuguese abroad saw the English-based contingent particularly effective in finding the back of the net, with Bruno Fernandes and Pedro Neto making the headlines with superb individual goals.

There were also goals for Ruben Neves and Hélder Costa in the Premier League, as well as Alfa Semedo in the Championship, while Andre Silva’s prolific season continues in Germany and Nelson Oliveira scored twice for Greece’s AEK.

The tone for the weekend had been set on Saturday when Rony Lopes and Francisco Trincão were the star performers, but on Sunday the stories mainly centred around the Premier League and in particular Pedro Neto of Wolverhampton Wanderers and Manchester United’s Bruno Fernandes.

“Big moment” from Neto for Wolves

Wolves headed to Southampton in the Premier League’s early fixture with both sides looking for a win after a disappointing recent spell of results. Southampton came into the match on the back of five straight league defeats, while Nuno Espírito Santo’s Wolves have found themselves in the bottom third of the table amid a difficult season since the loss of star striker Raul Jimenez.

Nuno selected Rui Patricio, Nélson Semedo, João Moutinho, Rúben Neves and Pedro Neto in his line-up, with Vitinha and Fábio Silva on the substitutes bench. Wolves’ nerve was tested as they trailed 1-0 at half time, but Neves drew the visitors level from the penalty spot on 53 minutes after Semedo’s cross struck the hand of Ryan Bertrand.

The winner came twenty minutes into the second period and it was all the work of 20-year-old winger Neto. The former Braga man received possession on the right of the penalty area before beating Jannik Vestergaard and firing past Ale McCarthy from a tight angle with his left foot. Wolves held on for the points and moved above Southampton into 12th place.

Nuno pleased with second half

“In the second-half we were on the front foot, we were searching and impressing,” Nuno said after the game. “We played better football and we were more organised, and we achieved two goals and then we defended very well.

“I was pleased with the ability to reverse the momentum of the game, the way they adjusted and the reaction of our players, but there were still many negatives in the game that we have to correct.”

“Pedro Neto’s goal? I think he did really well. Pedro played very well, but I’m pleased with the whole team. Both of the wingers today when they changes sides, when they were on the inside of the game, Adama with more actions, Pedro with more actions.

“They are very talented players, players like Pedro, Adama and Daniel [Podence], their games are based on one-v-one situations and when they have space and they can do their actions, they are very difficult to stop.

“The standards are very high, our players are very talented, so we expect the best from them. But I’m pleased because it was a huge moment for us, a big, big moment that Pedro gave us.”

Manchester United’s diminishing hopes of competing for the Premier League title suffered another setback on Sunday afternoon when they were held to a 1-1 draw at relegation-battlers West Bromwich Albion at the Hawthorns. United went behind in the second minute and although Bruno Fernandes drew the Red Devils level just before half time, a meek second-half showing saw United leave with just a point.

Fernandes’ goal was typical in its brilliance and timing, getting United back on level terms just before the break. The former Sporting man connected sweetly with Luke Shaw’s cross on his left foot, dispatching a stunning volley past West Brom goalkeeper Sam Johnstone. The goal was Fernandes’ 14th in the league this season and meant he scored for the third straight Premier League match.

Elsewhere in England, a highly-entertaining game in London saw Arsenal beat Leeds United 4-2 at the Emirates, with Hélder Costa coming off the bench to score his second goal of the season for Leeds. In the Championship, on-loan Benfica midfielder Alfa Semedo got himself on the scoresheet for Reading, who were beaten 2-1 at home by Millwall. 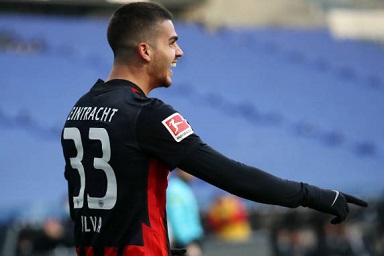 André Silva has now scored six goals in his last four games as his prolific season with Eintracht Frankfurt shows little sign of slowing down. Silva broke the deadlock on 57 minutes on Sunday as Eintracht beat Cologne 2-0 in the Bundesliga to move into 3rd place with a fourth straight win.

For Silva, 18 goals in the German top flight, which although six short of leading scorer Robert Lewandowski, stands the Portuguese in good stead to challenge Frankfurt’s club record. Silva is eight goals short of legendary striker Bernd Hölzenbein’s record haul of 26 goals in a single league season, with twelve matches left for the Portugal man to increase his tally.

“We are very happy with him and he is happy too,” Frankfurt sporting director Fredi Bobic said of the striker. “He works very hard for the team and fully accepts these requirements, so he deserves the goals that come as a result. He has great technique and when it comes to being in front of goal he turns to ice.”

An eventful weekend for Portuguese in Greece was capped by Nélson Oliveira scoring a brace as AEK Athens won 4-2 at Larissa. The former Benfica man struck twice in the first half to give AEK a 2-0 lead at the break, representing a welcome recent return to goalscoring form for Oliveira. Meanwhile, Vieirinha missed a penalty during PAOK’s 2-0 win at Pas Giannina and there was a first defeat of the season for Pedro Martins’ Olympiacos, who were beaten 2-1 by László Bölöni’s Panathinaikos in the 'Derby of the eternal rivals' in the capital.

In the Netherlands, Lisandro Semedo scored the opener for Fortuna Sittard in their 2-1 Eredivisie win at Sparta Rotterdam, while in the Indian Super League there was a double for ex Feirense striker Luís Machado as NorthEast United beat Odisha 3-1 in Goa.