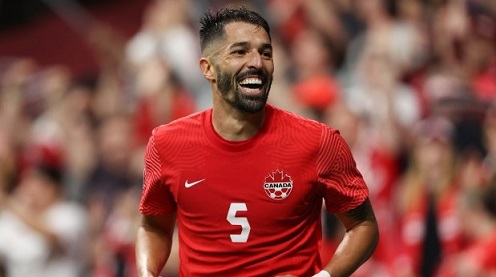 Much has been made of Canada making only their second appearance at a World Cup, and their first for 36 years, particularly with regard to a hungry new generation of talents such as Alphonso Davies, Jonathan David, and Stephen Eustáquio who have taken them to the biggest sporting competition on earth.

But amongst this crop of new players are a handful of veterans whose role on and off the pitch will be to shepherd those younger players through unchartered waters, one of whom is GD Chaves’ Steven Vitória.

Vitória is one of two Luso-Canadians in the squad alongside fellow Primeira Liga player Stephen Eustáquio. At 35 years of age, this World Cup will be a satisfying swansong to a long career for Vitória rather than the start of a thrilling new chapter, but no the less exciting for that.

Born in Toronto in 1987, a year after Canada’s last appearance at a World Cup, Vitória played his youth football in Canada before moving to the land of his parents to play for FC Porto in 2006. At the time he turned his back on the opportunity to play youth football for Canada as he opted to represent Portugal at U-19 and U-20 level. However, he would never make a senior appearance for either Portugal or Porto.

A series of loans at smaller Portuguese clubs followed, and after leaving Porto in 2010 Vitória enjoyed the most productive spell of his career when he joined then second division side Estoril, becoming a regular starter for two seasons, before gaining promotion to the Primeira Liga where he remained a starter in the top division.

By the time he left Estoril in 2013 he had made 97 appearances in all competitions, and remarkably (for a central defender) scored 24 goals, most of which coming from his emergence as a penalty-taking expert.

This promising spell wouldn’t last however, as a move to Benfica in 2013 started a three-year period of stagnation as Vitória again failed to make an impact at one of Portugal’s biggest clubs.

A move which started with Vitória describing it as “the most important and happiest day of my life” would ultimately end in disappointment as minutes under Jorge Jesus proved non-existent. After a handful of appearances for Benfica’s B team, he was loaned to Philadelphia Union in 2015.

Vitória left Benfica in 2016 and moved to Lechia Gdańsk in Poland, the only period of his career outside Portugal or North America. He made 44 appearances in all competitions in three years in another uninspiring transfer, but 2016 would prove to be an important year for Vitória as nine years after leaving the country he would officially join up with the Canadian national team, formally declaring a switch of allegiances back to Canada.

Vitória’s arrival with the national team coincided with something of an upturn in fortunes. Despite not qualifying for the 2018 World Cup, Canada reached the quarter finals of the Gold Cup in 2017, and qualified for Group A (the highest division) of the inaugural CONCACAF Nations League.

In the 2021 Gold Cup, Steven Vitória captained his team to the semi-finals, undoubtedly a great achievement for a nation on the rise.

Which brings us to November 2022, where ​​Vitória and company will hope to make an impact in a tough group which contains highly rated Belgium, 2018 finalists Croatia, and Morocco. Whilst making it out of the group will be a difficult ask for Canada, they come into the tournament in good spirits and good form.

Vitória himself is in a good place. The last three years of his career seen him make something of a resurgence. Despite being relegated with Moreirense, Vitória did his reputation no harm as a solid and reliable defender, something that did not go unnoticed by GD Chaves who took advantage of Moreirense’s misfortune to snap up ​​Vitória on a free transfer in the summer, and he’s enjoying a great start to the season as his side sit in a healthy 8th place in the table.

And Vitória has still got an eye for goal, scoring three times in 13 matches for Chaves in 2022/23, including a spectacular 18-yard header in the team’s sensational away win at Sporting in August. It was the first time Chaves had ever beaten the Lisbon club in the Portuguese capital.

It may have taken a while, but you sense Vitória has finally found some stability in his career, and a successful World Cup with Canada would be the final hurrah he deserves.

Armando
This comment was minimized by the moderator on the site

Great article! Best wishes to Vitoria and Canada. They made Belgium look like a too old B team They dominated most of the game and their smash and grab, foot forward style was a pleasure to watch.

Vitoria should have taken the penalty, way more experience.