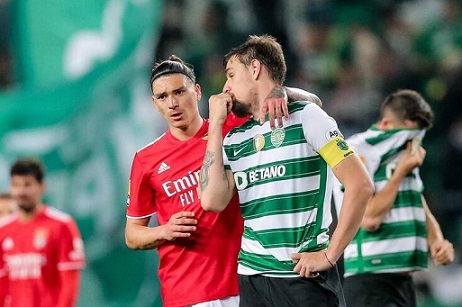 Much has been made of the fact Sporting Clube de Portugal have not supplied a single player to Portugal’s squad for World Cup 2022, making it the first time the Seleção has headed to a major tournament with no Lions in the group. However, four Sporting players have made it to Qatar 2022.

Hidemasa Morita, although he did not play, will be overjoyed with Japan’s shock win over Germany today. And in Group H, one Ghanaian, Issahku Fatawu, and two Uruguayans, Sebastián Coates and Manuel Ugarte, will be striving to break the hearts of Portuguese football fans.

Sebastián Coates made his debut for Uruguay in 2011 whilst Manuel Ugarte did so as recently as last year. Amazingly, despite the 10-year gap, it was the same manager, Óscar Tábarez, who gave them their opportunity.

For those that don’t follow the Portuguese league, Sebastián Coates will still be a name you may recognise after his high-profile move to Liverpool back in 2011. Having risen through the ranks at Montevideo-based Nacional, Coates started making a name for himself as a classy, elegant centre back.

In the Montevideo derby against Peñarol Coates would go on an incredible run up the wing ghosting past players and eventually creating a goal with a sublime assist. The result put Nacional above Peñarol and they would go on to win the league that season.

A place in the starting 11 for Uruguay would be the reward for an incredible season for Coates. Partnering veteran skipper Deigo Lugano in defence, Coates would concede just one goal in four matches of Uruguay’s Copa America winning campaign and he was named Young Player of the Tournament. Liverpool came knocking and a move to the Premier League was next.

Sadly, the following few seasons were anything but incredible for Coates. Unable to get into the Liverpool team he fell out of favour with the national team too although he regularly still made the squad. Returning on loan to Nacional in 2014 and then a loan to Sunderland were not enough to get Coates back to playing to his best.

Sporting would take a chance on the now 26-year-old who had barely played in the 5 years since his breakout season.

It’s safe to say Coates found his home in Portugal, although it was not all plain sailing. A succession of errors dogged Coates during his early years at the Lisbon club, and the often-chaotic goings-on off the field did little to help the giant centre-back stabilise his game. Nonetheless, his never-say-die attitude made him a fan favourite at Alvalade, even when things did not go well individually.

The turning point came with the arrival of young coach Rúben Amorim. A staunch advocate of 3-4-3, Coates excelled in a three-man defence, his lack of pace compensated by teammates either side of him and quick wing-backs offering cover. The now-captain of Sporting became the commanding presence and rock at the heart of the defence that he had always threatened to be.

As Sporting sensationally won the league in 2020/21 to end almost two decades without a championship title, Coates was simply magnificent. Marshalling a young defence, throwing his body on the line, and perhaps most importantly popping up with crucial goals in tight games, Coates was, for many, player of the season and one of the best central defenders the league has seen.

Now 32 years old, we certainly won’t be seeing any mazy runs up the wing, but under Uruguay’s new head coach Diego Alonso, we may well see the centre-back who has become such a commanding presence in Portugal over recent years. 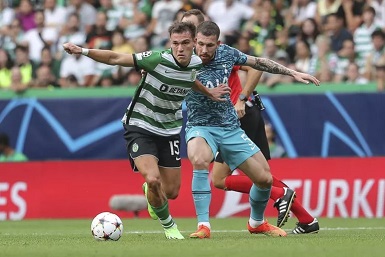 Manuel Ugarte will have a lot to do to break into Uruguay’s midfield. Freddy Valverde and Rodrigo Bentancur are seen by many as immovable objects, but in Ugarte we have a player who will grasp any opportunity he is afforded.

Starting out at CA Fénix in Uruguay, Ugarte would catch the attention of Famalicão in his breakout season. In 2019/2020 the hard-working, tough-tackling midfielder showed enough at the Montevideo club for the Portuguese side to bring him over the Atlantic.

Famalicão at this point were known for their ability to unearth gems from South America and with links to Atletico Madrid had built one of the best scouting networks in Portugal. The January arrival of Ugarte was perhaps their standout signing as instantly his quality was there to see.

His ball control and passing technique were impressive and we quickly began to realise there was more to this player than just stamina and aggression. Half a season was all Sporting would need to pounce, seeing Ugarte as someone who could be a starter in their midfield in future years.

It was always going to be hard for Ugarte to break into a midfield occupied by Mathues Nunes and João Palhinha but as the season progressed Ugarte got more and more game time, even playing a full 90 minutes against Manchester City in the knockout stages of the Champions league.

The following season Ugarte was eyeing a regular place in the team and with the departure of Palhinha to Fulham and Mathues Nunes to Wovles, Ugarte suddenly found himself thrust into the starting 11.

Since then he has gone on to really show his credentials not only in the Portuguese league but also in the Champions League. For this year’s group stages he’s recorded the most tackles and interceptions combined, also breaking the record for the most tackles in a single game with 12 in Sporting’s 3-0 victory against Frankfurt.

It’s perhaps easy to forget that Ugarte turned 21 just this year and has only been playing in Europe since January 2021. The dynamic  midfielder is going from strength to strength, has been the subject of transfer rumours linking him to PSG, and he could well be the future of Uruguay.

Abdul Fatawu Issahaku has played just 140 minutes of club football this season at Sporting but is likely to become Ghana’s youngest ever player at a World Cup. It has been a whirlwind year for Fatawu who has become a key player in Otto Addo’s squad despite only turning 18 in March.

After winning the U20 African Cup of Nations, scoring a brace and grabbing an assist in the final, many of Europe’s top clubs were alerted to Ghana’s next top talent. Remaining in Ghana, Fatawu would move from home town club Steadfast FC to Dreams FC in the Ghanaian Premier League in October 2021.

As the season progressed Sporting felt the need to act quickly and in April 2022 secured his signature with a 5-year contract and a £60million release clause. As it was midway through the season, Fatawu was unable to register for the senior team and instead would work with Sporting’s B team.

Despite becoming a regular for the Ghanaian senior team, Fatawu has not been given many opportunities by Rúben Amorim this season, much to the dismay of many Sporting fans who are desperate to see more of “arguably the best African prospect of his generation” according to The Guardian’s Next Generation 2021 list.

Here’s hoping we can see Fatawu bring some magic to this year’s World Cup - although preferably not against Portugal!